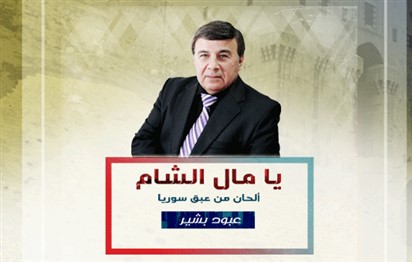 The Sultan Bin Ali Al Owais Cultural Foundation will be hosting a gala concert by Syrian vocalist Abboud Bashir and his ensemble under the title of “Ya Mal El Sham: Melodies from Syria’s Heritage”. The event, which will take place on Thursday, October 25, 2018, will feature a performance by the veteran Aleppine singer that will include a collection of heritage songs from the city of Aleppo, where Bashir was born.

The concert will feature a selection of songs, muwashahat and adwar, which Bashir is known for, such as: “Yamurru Ajaba” (Passing in Wonder), “Ya thal Qawam” (Thy Figure), “Ya Bahjat Al Rouh” (Oh Bliss of the Soul), “Mala Al Kasat Wa Saqani” (He Filled the Cups and Gave Me to Drink”, “Qadduka Al Mayas” (Your Swaying Figure), “Imta Al Hawa” (When Love?) “Ya Teira Teery Ya Hamama” (Fly O’ Dove!), “Malek Ya Hilwa?” (What’s Wrong Pretty One?), “Yamal El Sham” (Oh Treasure of Damascus), “Ib’atli Gawab” (Send Me a Letter) and “Seebooni Ya Nas” (O People, Leave Me Alone!) among many other memorable songs.

It is worth mentioning that Abboud Bashir was born in Aleppo and has been working as a teacher of oriental music in Syria, the UAE and the United States since 1990. In the early 1980s, he founded Al Orouba Club Youth Band in Aleppo.

This gala concert is a culmination of a year filled with successful cultural events for Al Owais Cultural Foundation, where it hosted an exquisite group of activities and hosted a number of leading singers such as Riham Abdel Hakim, Ghada Shbeir, Najat Rajawi, Makadi Nahhas, Shatha Hassoun and Ayman Tayseer among others. The foundation had also hosted many renowned Arab and international music groups such the Cairo Opera House Group, the Royal Oman Symphony Orchestra, Henhouse Prowlers Band from the United States and the World Vision Choir from Korea among others.