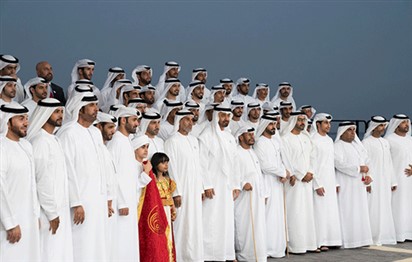 They were accompanied by Fares Khalaf Al Mazrouei, Chairman of the Cultural Programmes and Heritage Festivals Committee – Abu Dhabi.

During the meeting which was held at Qasr Al Bahr Majlis, Sheikh Mohamed emphasised the importance of poetry and literature, being part of the quintessential Arabian cultural heritage, calling for honing the skills of Arab youth to enrich the cultural and literary scene with an inexhaustible well of poetic creations.

The poets expressed their happiness at meeting Sheikh Mohamed, with a number of them reciting some of their poetic verses, through which they gave full vent to their love and loyalty to the UAE’s leadership and people.