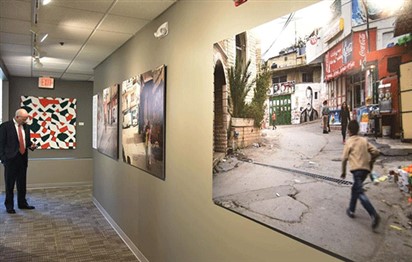 Entrepreneur Faisal Saleh’s space is America’s first to house works purely from Palestine. We find out it is about more than the art inside

In nine months from start to finish – the time it takes to carry a baby to term – Palestinian businessman Faisal Saleh set up the first museum of Palestinian art and culture in the United States. He did it on a shoestring budget, housing the galleries in the ground-floor spaces of a suburban Connecticut office building that he already owned. Instead of acquiring work, he convinced artists to loan it.

It is, as Samia Halaby, one of the artists whose work it exhibits, says, “an unorthodox project”.

The Palestine Museum US shows art that is both high and popular: paintings by Palestinian artists, as well as drawings by children in Gaza, antique examples of traditional Palestinian dress, documentary photographs of daily life in Palestine from a century ago, and everyday ephemera such as identity cards and passports.

Saleh has lived in the US for nearly 50 years, and conceived the museum as a way to counter the narrative around Palestinians. “For years, the mainstream media in the US and the West in general has painted Palestinians in a negative light, and dehumanised them,” says Saleh. “We hope to show that Palestinians are capable of excelling – capable of art and literature, poetry and music. We hope through the museum to change the discourse from the political arena to the artistic arena. We want to change the conversation.”

Museums as a pedagogical tool is common territory, but the Palestine Museum US is remarkable for its entrepreneurial spirit, which got something done in a country that has historically sided against Palestinians, and in an environment where institutions can be notoriously slow-moving. The Naqba Museum in Washington, DC, which was announced as “opening” three years ago – and on whose board Saleh briefly served – is still waiting to launch.

For the Palestine Museum US, Saleh simply opened the doors of an unassuming office building about 20 minutes north of Yale University. “We didn’t have to go through the problem of trying to find a venue,” he says. “You go to New York and you want to rent space for a Palestinian museum – they’re not going to rent you space, for a variety of reasons. It’s either they don’t like what you’re doing, or they like what you’re doing but they’re afraid it can be disruptive to the other tenants if there are demonstrations. It was easy to do it here.”

The museum’s all-volunteer board is made up of Palestinian intellectuals rather than art professionals, though Saleh says he is looking to add art industry people as he goes on. Rather than curating the works, he has a more inclusive policy, accepting works by Palestinians, whether he likes the pieces or not, and rejecting only a few. To someone steeped in the white-glove ways of the art world, his approach is refreshing – if at times shocking.

When I visited, Saleh remarked on how difficult it was to bring in a heavy piece of artwork, picking it up off the plinth to demonstrate its heft. I clutched my metaphorical pearls – touch the art in a museum?! But his attitude has meant that he has been able to accomplish a lot on a low budget, particularly because the works are simply there on loan. Rather than fundraise, all he needed to do was convince his fellow Palestinians.

“It wasn’t easy at the beginning because none of them had heard of us,” he says. “The museum wasn’t in existence yet. I managed to convince a couple of important artists” – namely Halaby and Mohammed Khalil – “that this was good, and that helped me with others.”

“Saleh is as genuine a Palestinian in his behaviour as they come,” Halaby says of Saleh, whom she only met when he approached her asking to show her work. “Especially in the sense of coming from a small village – he’s got the down-to-earth practicality of those who have to earn from the land all their lives. That’s why he’s been so successful.”

The founding of the Palestine Museum US also comes at a particular moment for Palestinian sentiment. The museum opened in April, a month before the US controversially moved its embassy in Israel to Jerusalem, amid violent protests in the West Bank and broad international condemnation. But there is also a sense that popular opinion, especially among younger people, is shifting away from staunch Israel support – and that Trump could even be furthering this sentiment change, ironically.

“Trump is helping out indirectly,” he suggests. “He alienated a lot of people in the US, especially after moving the embassy to Jerusalem. In a way, he’s helping the people of Palestine get sympathy in the US by going after the Palestinians.”

Saleh was born in 1951, the youngest of 11 children in the West Bank city of El Bireh, after his family fled their orange and banana tree farm near Jaffa during the Naqba in 1948. He entered the US in 1969, studying on scholarship at Oberlin College and the University of Connecticut, and has remained in the country ever since, getting married and raising his family there.

He built an employee benefits business that was acquired by a global consulting firm in 2010.

Though he is an amateur photographer, he had to educate himself quickly about art when he set up the museum, and stresses that it is only part of what the museum does. It also aims to show Palestinian popular culture, music and literature, and hold intellectual events. It recently hosted, for example, Aida Touma-Sliman, a Palestinian member of the Israeli Knesset, in an event that drew more than 150 people to the museum’s small Connecticut space.

Saleh has plans to open branches in 10 more US cities, from obvious choices such as New York and Los Angeles to places with substantial Palestinian populations, such as Detroit and Jacksonville in Florida.

“If we establish branches in all those cities, we could cover 80 per cent of the US population. This museum will have the biggest impact any Palestinian media project has ever had in the US,” Saleh says, undaunted. “It is a tremendous challenge, but it is necessary if we want to get the word out to the American public and educate them on what we are really about.”

The Palestine Museum US is open by appointment and on Sundays from 1pm to 5pm, off the Litchfield Turnpike in Woodbridge, Connecticut

Syria’s last shadow puppeteer hopes to save his art