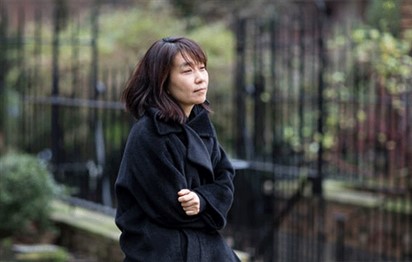 The world’s most secretive library, currently housed only in the minds of its authors and containing books that will not be read for almost a century, has added a new writer to its glittering list of contributors: the award-winning South Korean novelist Han Kang.

Han, winner of the Man Booker international prize for her novel The Vegetarian, was named on Friday as the fifth writer to be selected for the Scottish artist Katie Paterson’s Future Library project. Starting in 2014, Paterson has asked a writer a year to contribute a book to her public artwork. Riffing on themes of imagination and time, each work has been seen only by its author and will be printed in 2114, when a patch of 1,000 Norwegian spruce trees planted in 2014 in the forest that surrounds Oslo will be cut down to provide the paper for the texts.

Other authors who have contributed a book to the Future Library are Margaret Atwood, David Mitchell, Turkish novelist Elif Shafak and Iceland’s Sjón. Paterson said the project was a “living, breathing, organic artwork, unfolding over 100 years”.

She added: “The timescale is 100 years, which is not vast in cosmic terms. However, in many ways, the human timescale of 100 years is more confronting. It is beyond many of our current lifespans, but close enough to come face to face with it, to comprehend and relativise.”

Han said she considered the Future Library to be a project about time. “In Korea, when a couple gets married, people bless them to live together ‘for 100 years’. It sounds like almost an eternity,” she said. “I cannot survive 100 years from now, of course. No one who I love can survive, either. This relentless fact has made me reflect on the essential part of my life. Why do I write? Who am I talking to, when I write?”

Han said, ultimately, the Future Library would also deal with the fate of paper books. “I would like to pray for the fates of humans and books. May they survive and embrace each other, in and after 100 years, even though they couldn’t reach eternity,” the novelist said.

Paterson said the acclaimed South Korean author was chosen to contribute to the Future Library because she “expands our view of the world”. The panel of experts who choose a writer each year say they are searching for authors who have made an outstanding contribution to literature, and whose work has the ability to capture the imagination of this and future generations.

“Her stories are disquieting and subversive, exploring violence, cruelty, fleeting life, and the acceptance of human fragility,” Paterson said. “Han makes us confront uncomfortable issues: injustice, pain, mourning and remembering; a shared loss of trust in humankind, alongside the belief in human dignity. She leads us into the very heart of human experience, with writing that is deeply tender, and transformative. I believe her sentiments will be carried through trees, received decades from now, still timeless.”

Han will deliver her manuscript, which can be a length of her choosing, to Paterson at a ceremony in the Norwegian forest in May. It will be held in a room in the Deichman library, Oslo, alongside the unpublished and unread manuscripts by Atwood, Mitchell, Shafak and Sjón, until 2114, when it is finally printed.

“How strange it is to think of my own voice – silent by then for a long time – suddenly being awakened, after 100 years,” Atwood said of the project, when she handed over the library’s first book in 2015. “What is the first thing that voice will say, as a not-yet-embodied hand draws it out of its container and opens it to the first page?”

The following year, Mitchell called Future Library “a vote of confidence that, despite the catastrophist shadows under which we live, the future will still be a brightish place willing and able to complete an artistic endeavour begun by long-dead people a century ago”.