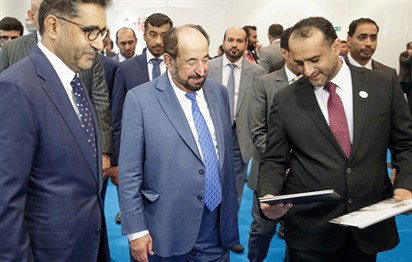 The collection of quotes will soon be translated into Russian, Hindi and Chinese too

The hard back book is split into various topics, with Sheikh Zayed’s insights on topics such as the important role of women in UAE society, the meaning of brotherhood and reconciliation.

Sharjah ruler Sheikh Dr Sultan bin Mohammed Al Qasimi attended the official launch of the book on Wednesday as part of his wider visit of the Frankfurt Book Fair.

Abdullah Majed Al Ali, the executive director from Department of Culture and Tourism Abu Dhabi’s National Library Sector, told The National that launching the book as part of the world’s biggest book fair was an important moment.

“This is part of a wider roll out, which has already seen the book translated into English, French, Spanish and now German. We have Russian, Hindi and a Chinese edition coming up, so we are very excited about that. This book is for those who were not born during his time and who haven’t heard him speak.”

The challenge was in trying to capture all of his qualities within the sayings attributed to him. We researched deeply and we presented statements, with him giving his observations on a variety of topics, from community to education.”

Al Ali says readers will be impressed by the inclusive and progressive outlook Sheikh Zayed held. “As well as uniting the UAE, he had an international outlook and was very concerned about our humanitarian work, and maintaining ties with other nations.”

Another aspect that came up in the research for the book, Al Ali says, was Sheikh Zayed’s views on the importance of female education.

“As far back as 1971, since the formation of the country, he was adamant on Emirati women getting an education. And you can see the result of that now, with many Emirati women successful in various fields, as well as being ministers in our government.”

On a personal note, he says that Sheikh Zayed’s philosophy inspires him, too, especially considering his role is akin to a cultural ambassador.

“His message deeply resonates with me and many of my colleagues,” he says. “They live on and light the way forward for us.”