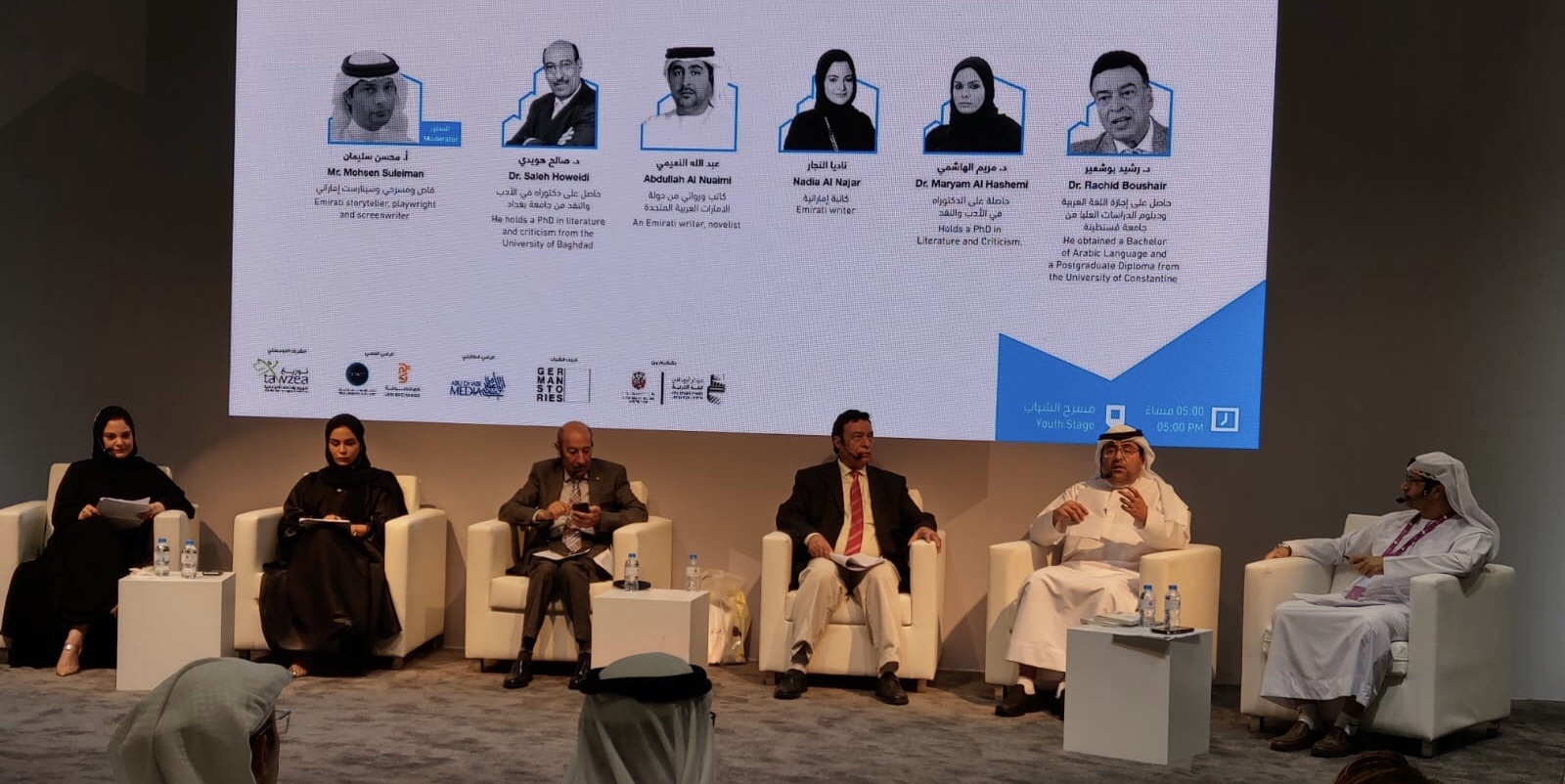 The Sultan Bin Ali Al Owais Cultural Foundation, in collaboration with Abu Dhabi International Book Fair, has organized a cultural symposium under the title of “Narration in the UAE over half a century”, which took place on Tuesday, May 25, 2022 at the Fair’s Youth Platform. The symposium, which was moderated by short-story writer Mohsin Sulaiman, featured Dr. Mariam Al Hashemi, Dr. Al Rasheed Abu Shu’air, Dr. Saleh Huwaidi, author Nadia Al Najjar and author Abdullah Al Nuaimi. The event was attended by a constellation of intellectuals, writers, journalists and literary enthusiasts.

The symposium shed light on narrative trends in the UAE over the past half a century, discussing various features of novel and short-story writing, the significant development of narration during this period and the criticism that emerged to keep up with the prolific output of narratives –particularly in the novel genre- as critics sought to monitor this development.

Speaking at the symposium, Dr. Rasheed Bou Sheir talked about the journey of narration since its early days and until today, citing prominent novel and short story authors such as Rashed Abdullah, Sarah Al Jerwan, Mohammed Obaid Ghobash and Ali Abu Al Reesh among many others who had a strong presence in the local literary scene. Moreover, Dr. Saleh Al Huwaidi attempted to define various narrative genres and highlighted their most prominent features and characteristics. Furthermore, Dr. Mariam Al Hashemi discussed the main narrative characteristics that have shaped the features of short stories and novels in the UAE, while writer Abdullah Al Nuaimi gave a personal testimonial about his own experience with narration and paid tribute to the pioneers who have paved the way in this field. In addition, author Nadia Al Najjar talked about her writing experience in the fields of short story, novel and children’s literature.

The event was also enriched by the questions coming from members of the audience that were a valuable addition to the research papers and studies presented at the symposium, which will be published by Al Owais Cultural Foundation in a special publication that will document this symposium in the aim of making it available to researchers and culture enthusiasts.

It is worth mentioning that this symposium reflects the keenness of Al Owais Cultural Foundation to collaborate with similar cultural institutions both in the UAE and abroad, and being geographically present at important cultural events such as the Abu Dhabi International Book Fair, which is considered a prominent international cultural platform.