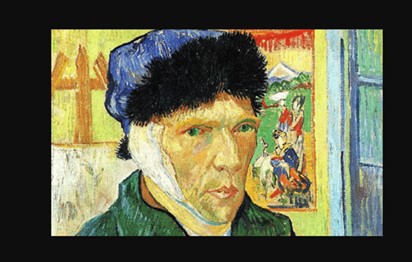 He has been held up as a quintessential artist unappreciated in his own lifetime, a tortured genius selling just a solitary painting before his suicide.

In fact, Vincent Van Gogh was beginning to gain recognition earlier than previously thought, according to new research, as an expert identifies a major exhibition starring his work visited by none other than the French president.

Martin Bailey, an author and curator, found a letter from Van Gogh’s brother Theo which he believes will help overturn the “myth that Van Gogh was ignored” in his lifetime.

Far from being entirely unappreciated, it suggests, the artist’s work was viewed in 1890, four months before his death, by French president Sadi Carnot who proclaimed himself “rather amazed” by the exhibition.

Theo van Gogh, who attended the private view of the Salon des Indépendants exhibition in Paris, wrote to his brother Vincent on 19 March, 1890 to say that Carnot had been the honoured guest and that ten of the artist’s paintings had been “well placed” on the gallery walls.

They are understood to have been paintings of the brightly coloured landscapes of Provence , including “Cypresses”, now at the Metropolitan Museum of Art, New York, and “Wheatfield after a Storm”, now in Ny Carlsberg Glyptotek, Copenhagen.

The president was escorted by the painter Paul Signac, a friend of the Van Gogh brothers who had visited Vincent at his Arles hospital the previous year.

Bailey writes of the letter, which is now held by the Van Gogh Museum archive: “Theo mention Carnot’s visit slightly casually in his letter to Vincent, which may explain why this episode has been rather overlooked.”

The author cross-referenced the letter with an account of the exhibition as a whole published in Le Petit Parisien on March 21, 1890, which said Carnot was struck by the “disconcerting tonalities” of some of the paintings in the Indépendants exhibition and left after his visit “rather amazed”.

Van Gogh was, at the time, in Saint-Paul-de-Mausole, a mental asylum in the south of France, after mutilating his ear. He would die in July of 1890. Bailey found contemporary press reports which record that Carnot spent over an hour at the  exhibition, escorted by the painter Paul Signac, a friend of the Van Gogh brothers.

Signac, then  among Vincent’s ardent admirers, had visited him in hospital in Arles the previous year. Vincent’s ten paintings were “well placed” in the Paris exhibition, according to Theo.

Bailey, who has written several books about Van Gogh and is co-curating a Tate Britain’s exhibition of the artist’s work next year, said: “During the 20th century, as Van Gogh’s fame steadily grew, the legends around him developed.

“It so often said that he was ignored during his lifetime, as evidenced by the fact that he only succeeded in selling a single painting. “He may have failed to sell, but I believe that he was beginning to gain recognition, at least in avant-garde circles in Paris – which was then the art capital of the world.

“I have long suspected it was a myth that Van Gogh was ignored – and the Salon des Indepéndants exhibition and the visit by the French president suggests that he was beginning to win some acceptance.

“Fresh research for my new book ‘Starry Night’ shows that Van Gogh’s paintings were almost certainly seen during his lifetime by the president of France, Sadi Carnot.

“Once one sees Van Gogh as an artist who was beginning to become appreciated, it is easier to understand why his work had such an influence on the artists to come, in the 1890s and the early 1900s, and to appreciate why he played such a key role in the development of Modern art.

“Had his life not come to a tragic end, at the age of 37 in 1890, he would have continued to develop – and he would soon have begun to be regarded as a genius.

“We need to break away from the myths that surround Van Gogh, and try to look afresh at his work.”