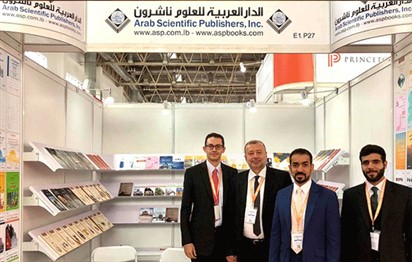 Always enthusiastic to participate in various regional and global cultural events, the Emirates Publishers Association (EPA) took part in the 25th edition of the Beijing International Book Fair (BIBF), which was recently held at the China International Exhibition Centre.

The Beijing Book Fair, one of the most important publishing forums in Asia and China’s largest literary event, featured more than 2, 500 publishers representing 93 countries from across the world.
Within the 2018 BIBF pavilion of the Sharjah Book Authority (SBA), EPA highlighted the UAE’s flourishing book industry and future avenues to advance the publishing sector. The association also highlighted efforts to support local and international publishers, as well as its pioneering initiatives and activities.
EPA members Thaqafa Publishing and Dar Al Arabiya for Science (Nasheroon) participated in BIBF and held many meetings with a host of Chinese and Asian publishers to explore avenues of bilateral and joint cooperation. The EPA stressed that it is discussing prospects for increasing the number of its affiliate Emirati publishers in the upcoming editions of BIBF, through exploring potential opportunities for cooperation with other entities.
Rashid Al Kous, Executive Director of EPA, said: “The association’s participation in this distinguished cultural extravaganza reflects its keenness to represent Emirati publishers at various regional and international cultural forums, as well as introduce them to EPA’s leading experience and its efforts aiming at advancing the book industry in the country.”
He noted that the EPA introduced Chinese authors and intellectuals to the most important options it offers, opened new channels of communication and opportunities for both sides to exchange knowledge and translation rights. This move that will serve the local readers with some Chinese literature.
Al Kous added: “Publishing is the main driver of the cultural landscape, where knowledge is transferred. Hence, advancing the publishing sector contributes to the advancement of the entire cultural scene. This is achieved by abiding to laws and the rules governing the process as well as by protecting copyrights and intellectual property.”
In conclusion, the EPA Executive Director said: “Our presence in this prestigious Asian literary extravaganza helped introduce Chinese publishers to EPA’s legislation and regulations. EPA aims to facilitate the publishing of Chinese books and publications which are translated into Arabic. Thus, opening doors to Arab leaders to learn about Chinese creativity.”
The Beijing International Book Fair is a global cultural forum that draws thousands of publishers, authors, and readers who come to China every year to participate in its activities. The BIBF offers precious opportunity for intellectuals, literature enthusiasts, and book industry professionals to acquaint themselves with China’s most important offerings – knowledge and cultural diversity.
www.sharjah24.ae