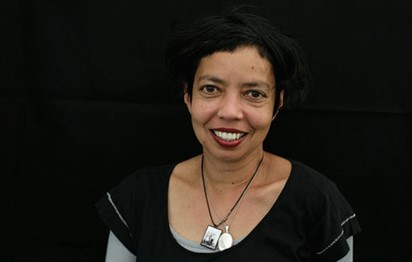 The Life to Come author says that even in tumultuous political times, literature has an important role to play

The first time Michelle de Kretser won the Miles Franklin literary award, she was woken up in the middle of the night in a hotel in East Anglia by a phone call relaying the news. She was scarcely less surprised when she was told this week that she’d won it again, this time for The Life to Come.

“It felt incredible the first time but it feels even more amazing the second time,” De Kretser said.

The Life to Come was announced as the winner of the $60,000 prize on Sunday at an event at the Melbourne writers’ festival. Comprising five linked stories, loosely connected by a writer-character called Pippa, De Kretser described the novel for Guardian Australia last year as an exploration of “our flawed perceptions of other people and the way our understanding of the world shifts over time and according to changes in context”.

It was described by the judging panel as a “powerful novel that effortlessly blends sharp satire of the literary world with deeply compassionate portraits of lonely people and their strategies for survival. It keenly skewers certain contemporary ways of being, such as our obsession with food, use of social media and modes of political activism”.

The award, now in its 61st year, is the most recognised literary prize in Australia. It was named for the Australian author of My Brilliant Career Stella “Miles” Franklin and established in 1954 by her estate to recognise novels of “highest literary merit” that “represent Australian life in any of its phases”.

The 2018 shortlist was widely considered a nod to overlooked writers and to women, with two books from independent press Giramondo – including Felicity Castagna’s No More Boats and Gerald Murnane’s first nomination in his 44-year literary career for Border Districts – alongside The Last Garden by Eva Hornung (Text), Storyland by Catherine McKinnon (Fourth Estate), and former Miles Franklin winner Kim Scott’s Taboo (Picador).

The Life to Come, which was also shortlisted for the 2018 Stella prize and is published by Allen and Unwin, is Sri-Lankan born De Kretser’s fifth novel. Her fourth, Questions of Travel, published in 2012, won the 2013 Miles Franklin and the 2013 Prime Minister’s literary award for fiction.

“I have been so moved by the generosity of readers with this book,” De Kretser said. “When someone says ‘this made a difference’, ‘this helped me’ – they’re not the kind of things that publishers quote on the back of books… and yet that’s the reason you write. You hope that [the book] will make a difference to someone’s life in a good way.”

De Kretser said that even in tumultuous political times, literature had an important role to play. “Literature is a ruthless kind of truth-telling. In politics these days we just see lies. So literature, literary language can express reality in a way that politicians just seem to have lost touch with.”