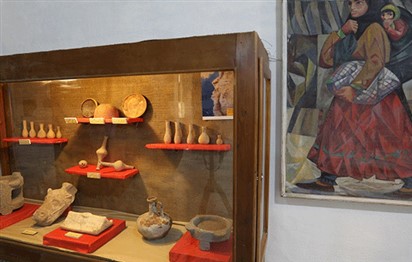 An antiquities museum in Syria’s rebel-held province of Idlib said to house one of the world’s oldest dictionaries reopened on Monday after five years, an AFP correspondent said.

Dozens of visitors trickled into the museum in Idlib city to see what an official said represented just a fraction of the building’s collection.
Ayman al-Nabu, head of antiquities for the city controlled by Daesh, said the museum had been damaged by air strikes and looting during Syria’s nearly seven-year conflict.
After it was closed in 2013, “we carried out maintenance and rehabilitated the museum to give it new life,” he said.
Organisers are planning “visits for a whole generation of students who have been unable to visit archeological sites due to the war,” he added.
The museum is said to house a collection of clay tablets dating back to 2400-2300 BC, which bear witness to the invention of the first alphabet.
They were discovered in Idlib province’s site of Ebla, which was the seat of one of ancient Syria’s earliest kingdoms.
Nabu urged UNESCO to help preserve the archeological sites of the province, and said archeology has nothing to do with politics.
Idlib is the last province in Syria that is still largely under opposition control.
www.sharjah24.ae
1
1
Share