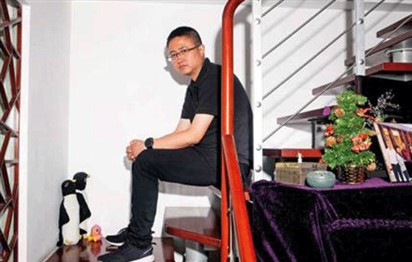 Zhou Haohui says crime is a universal theme, which is why detective stories or police thrillers can more easily transcend cultural divides than, say, historical fiction

Zhou Haohui, the latest author to catch the wave of Chinese crime fiction crashing on international shores, had an unsatisfying job teaching engineering at a university outside of Beijing in 2007 when he began publishing — online — the novels that would earn him a cultlike following in China.

These books — a trilogy about a police hunt for a vengeful killer — went into print two years later, ultimately selling more than 1.2 million copies. They inspired a serial on the streaming site owned by Tencent, the social media giant, that has been watched a staggering 2.4 billion times, according to his agent, China Educational Publications Import & Export Corp. A feature film went into production in April.

Death Notice, the first book of Zhou’s trilogy, was released in the United States and Britain last month. The US publisher, Doubleday, hopes it will vault him into the ranks of other contemporary Chinese novelists — such as Qiu Xiaolong, He Jiahong and A Yi — who have reached a global audience with stories from China’s criminal underbelly.

Crime, Zhou says, is a universal theme, which is why detective stories or police thrillers (even from an authoritarian political system like China’s) can more easily transcend cultural divides than, say, historical fiction.

“When you are talking about crime — criminal cases, the police in large cities, this suspenseful feeling of mystery — I feel that readers all over the world like this kind of thing,” he said in an interview in his hometown, Yangzhou, a historical imperial city of 2 million people on the Yangtze River a couple hours upstream from Shanghai.

He noted that Martin Scorsese’s 2006 film, The Departed, which won four Oscars, including best picture, was a remake of the highly regarded 2002 Hong Kong film Infernal Affairs, about a police mole infiltrating the mob. The drama simply shifted to South Boston.

Zhou, 40, seems unfazed by his celebrity. He is as likely as not to pass unnoticed, even in Yangzhou, where he is from and where his novels are prominently on display in bookstores. He is cerebral and soft-spoken, and his interests are broad.

In addition to a dozen crime novels, he has written two books on food, including one on the cuisine of his native region, known as Huaiyang and considered one of the “four great traditions” of Chinese cooking (along with Cantonese, Sichuan and Shandong, from the northeast).

His mild manner seems at odds with the lurid violence of crime novels. In Death Notice, the killer of two police academy cadets in a gruesome bombing resurfaces after 18 years, this time orchestrating the murder of a revered police sergeant whose failure to solve the original case haunted his career.

Then, as now, the killer fashions himself as an avenger, bringing justice to those whose crimes have gone unpunished. The killer calls himself Eumenides, after the third of the Oresteia ancient Greek tragedies by Aeschylus, and warns each of his victims in notes drawn with exquisite Chinese calligraphy, luring police into a diabolical game. The new killing spree revives a special police task force that had been shelved for reasons that, to explain fully here, would amount to a spoiler.

Of course, censorship shapes crime writing in China, which to some can make the genre seem relatively wan. A Yi, who was a police officer in Jiangxi province before writing thrillers, said in an interview that the crime novel might have exhausted its potential in China. “Crime novels still do very well,” he said, “but for the writers, creating these stories is getting harder and harder.”

Zhou acknowledged that the censors had posed problems, forcing him to make changes in his books, but he said novels tend to get more leeway than movies or content online, which the government polices with greater zeal because that is where more Chinese are spending their time. The investigation at the heart of Death Notice does hinge on questions of police corruption and the privileges the wealthy in China enjoy — all of which are experiences Chinese readers can relate to.

“When you write crime novels you know you shouldn’t write anything too negative,” Zhou said, “but you have no way of knowing where the line is.” The solution, he said, was to have a good editor with a better sense of what can pass muster.

The producers of the film version of Death Notice dealt with potential political sensitivity by shifting the action to Hong Kong, which is considered by communist propaganda to be thoroughly dissolute after decades of colonial rule.

For commercial rather than political reasons, Zhou’s literary agent here also made changes in the English-language version of the book, translated by Zac Haluza. The action now takes place in Chengdu, the capital of Sichuan province, not Yangzhou or nearby Nanjing, the cities Zhou said he had in the back of his mind when crafting the story. The assumption was that Chengdu, which is best known for pandas and spicy food, would be recognisable to foreign readers and give the drama a more visceral feel, Rob Bloom, Zhou’s editor at Doubleday, said in an email.

When asked about the change, Zhou laughed and said he, too, had wondered why they did that.

Doubleday has options for the second and third parts of the trilogy, called in Chinese Fate and Farewell Song, but has not yet committed to them — perhaps because Zhou’s first foray into English, a novel called Valley of Terror, published by Amazon Crossing last year, did not take off.

Yangzhou is renowned for its literary history, especially a ninth-century poet, Du Mu. One poem lamenting the whereabouts of a friend is so well known that Zhou’s colleagues recited it in unison during an excursion to Slender West Lake, a World Heritage Site in the city. (Mao Zedong’s handwritten transcription of Du Mu’s poem is carved into a stone monument beside the lake.)

Zhou remembers playing in the park as a child, when there was no entrance fee, but literary inspiration came to him much later.

“In the Chinese education system, there was no one to guide you to consider ‘what do you want to do?’” he said. “They just told you, study, study, study and get into a good university.”

He did, attending Tsinghua University in Beijing — one of the country’s most prestigious — and pursuing a degree in environmental engineering. Soon, though, he realised he did not really like engineering. He wrote as a hobby, posting stories on the message board of the university on the edge of Beijing where he taught for a decade.

He began to write in earnest in 2003 during the SARS crisis, when millions of people were effectively quarantined by the viral outbreak; hundreds died. “We had nowhere to go hang out and have fun,” he said, “so I would spend the whole day shut in my room.”

With the success of the trilogy, he was able to quit his job as a professor in 2012 and return to Yangzhou. He has given up writing exclusively and now devotes his creative efforts to producing his own films online, through the production company, Frog Brothers, which he founded. He has also begun studying film direction, having been disappointed that the popular serial version of his trilogy turned into a dark comedy.

Producing and directing allow him to control more aspects of the stories he wants to tell, he said. His first online film project was a psychological thriller, roughly translated as Shuttered Room, about two strangers mysteriously confined together in a sealed apartment.

Zhou’s taste for the cinematic is clear. The germ of the idea for the trilogy came from a 2006 music video by Jay Chou, the popular singer and actor from Taiwan, and the narrative is lean and fast paced, with little by way of description or excessive ruminations.

He seems part of a generation for whom the boundaries between the written and the visual, the printed word and the image on screen, have blurred, allowing him to glide dexterously from one medium to the next, one genre to the next. The format, Zhou said, was not so important. “I just ask myself, ‘What is the best way to tell the story’.”