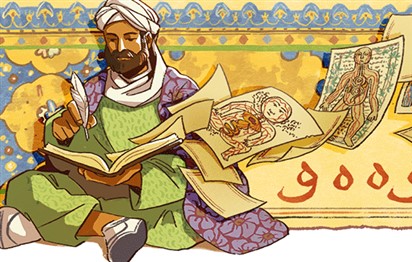 Yesterday Google Doodle celebrates the life of philosopher-scientist Ibn Sina. Ibn Sina was born in c. 980 in what is now modern-day Uzbekistan. And around this date is what have would have been his 1038th birthday.

The illustration is by Cynthia Yuan Cheng and only users in Morocco, Algeria, Libya, Egypt, Saudi Arabia, Iraq, Oman and the UAE can see the doodle. To know more about why you can only see Doodles from certain regions, read our story here.

By the age of ten, Ibn Sina had memorised the Quran, and by the age of 16, he began to study medicine. By 18 he was treating patients. But then the end of the Samanid dynasty – a turbulent period in the region’s history – saw him wandering towns and cities, working a variety of jobs. His growing reputation as a polymath meant that scholars flocked to him to engage in study and discussion.

He eventually settled in Isfahan, in the employ of the local prince, the Kakuyid ruler, Muhammad ibn Rustam Dushmanziyar, where he saw out the rest of his days, writing his huge canon of philosophical and scientific work, which included the topics of alchemy, astronomy, psychology and Islamic theology.

Ibn Sina is thought to have written over 400 books, 240 of which survive today. His five-volume medical encyclopedia, The Canon of Medicine (Al-Qanun fi’t-Tibb) was his most important contribution to medical science.

Known as the “Canon” in the West, the five-volume encyclopedia of medicine was translated into Latin in the twelfth century and was used as a standard medical text in Europe until the 17th century.