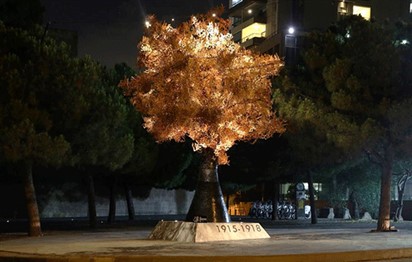 A hundred years after the tragedy, for the first time, a new monument in Beirut pays tribute to all those who suffered during the years of famine. In a plaza just off Damascus Road in Beirut – the former Green Line that divided the city in two during the Lebanese civil war – stands an enormous steel tree. Instead of leaves, its branches are covered with the swooping curves and staccato dots of Arabic calligraphy.

“I wanted to create a memorial that is a tree because trees are the only living things that were present 100 years ago and could have seen the event and can bear witness to it,” says Yazan Halwani, the artist behind the memorial, which he has called Tree of Memory. “I’m not a person that likes symbolism, but I think a tree has roots that spread very far, it has branches that spread further from where it started, and I find this a very interesting parallel with what Lebanon is today.”

Like many historical events in the country, the Great Famine is a controversial subject. “Each person tells a different version of the story,” says Halwani, who interviewed several historians to understand the diverse causes of the famine.

“Some people say that it was purely in Mount Lebanon, it was a genocide against mostly Christians, and there is another opinion that it actually touched on all of what later became Lebanon.”

The famine occurred during the first World War, when Lebanon was under Ottoman rule, and was caused by multiple factors. In 1915, a swarm of locusts devoured local crops, resulting in massive food shortages exacerbated by a blockade set in place by the Allies to cut off supplies to the empire. In response, the Ottomans prioritised food for soldiers engaged in the war, further diminishing supplies for civilians.

Many areas of modern Lebanon were impacted by the shortage, in particular the Mount Lebanon region, inhabited mostly by Christian and Druze communities. Of the 400,000 inhabitants in Mount Lebanon, more than 200,000 are estimated to have perished.

To create the memorial, Halwani chose 15 sentences penned by authors who lived through the famine years and transformed them into unique foliage. Each sentence is written in a single piece of steel, painted a bronze colour, evocative of autumn leaves. Welded together around a skeleton of steel branches, the sentences bend and curl back on themselves, intertwining to create a thick canopy of words. The writers Halwani chose include Gibran, Lebanese author and diplomat Tawfiq Yusuf Awwad and prominent feminist writer and translator Anbara Salam Khalidi. He has yet to reveal the full list of authors and sentences, preferring to release the details slowly over time, allowing visitors to spot new phrases hidden within the mass of letters and words.

“I tried to choose sentences that are still relevant to our contemporary world today,” he says. “It’s not like the Lebanese were fighting and died as martyrs. They were much more passive. They died of hunger, but they were not main actors, they were spectators in their own deaths… I think there is a parallel with what is ­happening today. The Lebanese are not necessarily main actors in what they live but are more like spectators.”

The parallels Halwani highlights in his chosen snippets of text emphasise the ways in which foreign powers impact the lives of ordinary Lebanese people, the ongoing tide of emigration by citizens seeking a better quality of life and the ways in which sectarian politics continue to influence daily affairs. Tree of Memory is one of very few public monuments commemorating historic events in Lebanon. It was spearheaded by the nearby Saint Joseph’s University, in collaboration with writer Ramzi Salame. Halwani’s idea was selected after a call for submissions from local artists. Although the project began as a private initiative, the municipality donated the plaza surrounding the monument, which was funded by the Lebanese Central Bank.

The monument has not yet been officially inaugurated, but it is already visible to the public. Halwani, who contributed more than US$2,000 (Dh7,345) of his own money, hopes that the municipality will add benches to the plaza, allowing people to use it as a place of gathering and contemplation. The intention of the Tree of Memory, he says, is to encourage feelings of positivity, despite the tragic events it commemorates.

Measuring eight metres tall and seven in diameter, to match the heights and shapes of the real trees surrounding it, the Tree of Memory is a beautiful, imposing presence that encourages quiet reflection. A small plaque at the base provides a brief history of the Great Famine.

“If you look at other famine memorials, you’ll see they’re quite explicit in depicting the famine,” Halwani says. “Here I wanted to have something that’s a bit more hopeful, more joyful… It’s as if the Lebanese sometimes want to forget, and I think the main challenge here is how do you depict something sad in a way that people don’t reject it?”

The artist hopes that the Tree of Memory will rise above sectarian narratives and serve as a symbol of national remembrance.“There is this sentence that I always hear, which is: ‘In Mount Lebanon there was famine, but in the other parts there was hunger,’ and I find it quite sad that we use such nuances, as if it was a competition of who suffered the most,” he says. “I picked sentences describing suffering across what became Lebanon, to say that this is a national symbol… It’s for the people who died, the people who were hungry and most importantly, the people who emigrated, because I think this is something that we still see today.”

Born in Beirut, Yazan Halwani, 25, combines Arabic calligraphy and graffiti, working predominantly on city walls. He describes his work as something that has shifted “towards an open expression of Arabic culture that manifests itself in the streets through the use of calligraphy, geometry and portraits.” He adds that his work “grows with the city not against it”.

He has created murals of Lebanese-American writer, poet and painter Kahlil Gibran, Lebanese singer Sabah (pictured far right), world-renowned Lebanese singer Fairouz, Palestinian poet Mahmoud Darwish, and Palestinian teenager Ahed Tamimi. His work also includes portraits of everyday people, such as his famous mural of Ali Abdallah, a homeless man who died on the streets of Beirut. His work is seen on streets across the world, from Singapore to the UAE. Pictured right is a piece in Mannheim, Germany that speaks to the difficulty of leaving things behind.

Stan Lee, creator of Spider-Man and other Marvel superheroes, dead at 95