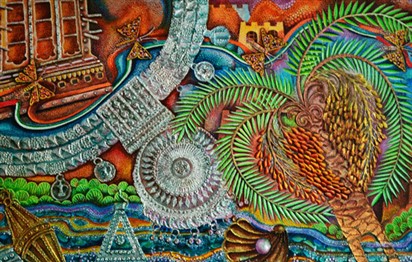 The exhibition underlines the keenness of Al Owais Cultural Foundation to actively connect with other cultures and civilizations around the world and to promote art and culture. The Foundations efforts are part of the general culture of tolerance observed in the UAE, which aims at building cultural bridges with different nationalities residing in the UAE.

It is worth mentioning that in the aim of promoting art and culture, a group of Indian artists and art connoisseurs formed the Guild in UAE 2010. Since its inception, the Guild has been conducting painting exhibitions, workshops, experimental sessions, discussions and other related activities on a regular basis. The Guild provides artists with a platform to showcase their talent and promote their work and also helps them to sell it. The Guild is the result of committed individuals who are passionate about art and pursue it as a way of life. The Guild consists of the following artists:

Kumar Chadayamangalam could aptly be called a born artist. He has been doodling, sketching and painting since a very young age. He is an acclaimed artist who has found his true calling, or rather, true medium; oil on canvas. Kumar is a fine arts graduate and has participated in many exhibitions including the annual exhibitions in India, the UAE and Saudi Arabia. As a member of a large number of art groups, Kumar has been actively working towards promoting art in the Middle East. A master craftsman who portrays the complexities of life in a simple way, Kumar has won numerous awards in his artistic journey so far. He is a member of Emirates Fine Arts Society and Dubai International Art Centre, Dubai.

One of the youngest members in the Guild, Lidhin Chirayil Dharmarajan was born in 1986. He started drawing extensively from a tender age and has won innumerable prizes in drawing competitions in the interschool and state levels. Although education showed him a path to computer science, which he completed in flying colors, Art was hard coded in his genes.

The call of passion was irresistible and he chose the obvious path to Fine Arts College, Thrissur to pursue BFA in Applied Art in 2005. He currently works as an art director with a prominent advertising agency in TECOM.

A self-taught artist, Narayan has participated in many group exhibitions and solo shows. His paintings adorn many living rooms and offices across the world predominantly in India, UAE, USA, Singapore, Spain, Oman, Saudi Arabia, Lebanon and Nigeria. Over the last 15 years he spent in UAE, he has completed over 1,800 paintings and projects. With his deft use of grey shades and vibrant colors, Narayan brings alive the intricacies of life in all its detail. Narayan regards himself as extremely fortunate to pursue his passion and make a living through it

Nisar Ibrahim, hailing from Thrissur, Kerala is an architect and art director by profession since 1998. He uses vibrant colors in his expressive strokes to convey what simulates and hurts his senses. As a keen observer of the world around him, he uses his artistic abilities to explore the realms of human mind as well as the plight of human beings around the world. No wonder his keen interest in global politics, anti-colonialism and anti-imperialism, war and famine often found way to his canvas. His design of Global Village pavilions in Dubai is one of his most notable works. His sculpture of the late His Highness Sheikh Zayed Bin Sultan Al Nahyan has won a lot of accolades. A regular participant of art exhibitions he also finds time to contribute to the film industry in his capacity as an art director. Nisar has directed several short films and has won many prestigious awards for these works.

Born in a village in Kannur in north Kerala, Vineeth started dabbling with colors from an age he could hold the painting brush. Along with art, he has been passionate about electronics and traveling.Vineeth constantly explores new lands, over 30 countries in the current list and counting, and finds inspiration for his artistic journey. He travels to understand art, history, people and nature of the lands in detail. Besides travelling, he has a passion for reading and has done a large number of portraits of his favorite writers and artists which were autographed by them. Guided by eminent artists like K.K.N. Nambiar, Vineeth has been participating in art exhibitions for years. His favorite medium is oil on canvas and has already established a style of his own, which he consistently tries to improve.

Ramesh Vellinezhi is a man of myriad interests. He is a football player, an aficionado of classical music and a mural artist. He started drawing at a very young age. At the young age of 15, he was inspired by the great mural artist Suresh K Nair who later became his guru. Since then he has completed hundreds of murals Paintings and still has the same enthusiasm and excitement when he takes up a new work He finds his true inspiration in music and has a huge collection of Indian classical music in his possession. A true connoisseur of classical music and an ardent devotee of mural art, Ramesh Vellinezhi is an artist to the core.

Versatile is the word to describe Sadasivan Ambalamedu. He has made a distinctive mark for himself as a painter, sculptor and writer. Armed with a 5-year post graduate diploma in sculpture from RLV College of Fine Arts, Tripunithura, Sadasivan selected UAE for his career. Active as a sculptor, painter and writer for the last four decades, Sadasivan is a regular participant at art camps and exhibitions in India and UAE. His creations in terracotta have earned accolades and prizes. With an uncompromised urge to experiment with different mediums he is currently doing an innovative fusion of painting and sculpture to explore the unlimited possibilities. An environmentalist to the core, he penned the novel ‘Karimukal’ about his home town that has been reeling under environmental hazards. His collection of short stories titled ‘Ambalamedu Kadhakal’ is a vivid recollection of his own childhood.

Abu Muhammad is a native of Guruvayur in Thrissur district. His degree in fine arts helped him to get work as an artist with the prestigious Sharjah Cultural and Archeological Department, which he enjoys. He uses acrylic, oil and water color and has absolute mastery over all the mediums. He is a well-known figure in the cultural landscape of UAE. A recipient of many awards, Abu Muhammad believes in the all-pervading power of art and its immortality. A voracious reader, a passionate traveler and a music enthusiast, Abu Muhammad’s interests are varied. He is tremendously inspired by masters such as Vincent Van Gogh, Jackson Pollok and Henri Rousseau. His works are known for their formidably European style; quite aptly so for a man who finds his inspiration from the greatest European and American painters.

Sheena hails from Calicut. Sheena finds her inspiration from her surroundings and reflects different facets of life in a surreal way on her favorite medium; oil on canvas. She reminisces on the scenes and sights that attract her and then recreates them with her characteristic style. For her, inspiration is just around, always.  Bold strokes, natural light, skillful use of colors, and attention to detail are the characteristics that define her creations. A commerce graduate and an alumnus of the School of Fine Arts, Calicut, Sheena started painting at an early age and has been awarded and recognized widely for her unique creations. Sheena is equally adept at sculpture and uses the medium of clay to make outstanding creations. Passionate about art and keen on pursuing it, Sheena has participates in various group exhibitions in India and UAE.

Shehanas.C.K is a graduate in English Literature from Periyar University and has pursued Four-Years Diploma in Art (painting) and Crafts from. She is a passionate artist and her paintings were selected for the International Eminent Modern Art exhibition in Vietnam. She held several solo exhibitions. Her paintings are sold all over the world including Australia, India, Japan and Europe. Her art work was featured as the cover image of the August (2016 ,2017 & 2018) issue of Lakeview International Journal of literature and Arts with many more of her works featured in the journal’s Visual Arts section. She is a mehndi and dress designer as well, with clients from various parts of the world.

Murali Nettissery was born in Kerala. He had a passion for art from young age and was shaped by his Guru Artist Pappachan. He spends most of his free time in painting using his favorite medium – oil on canvas. As most of the self-learned artists, Murali also started with realistic paintings and now handles paintings reflecting the current social issues.

A native Calicut, Rasheed, he completed KGCE from Calicut School of Fine Arts with flying colors in 1998. Rasheed has been an active participant in exhibitions conducted across Kerala including the prestigious Kerala Lalithakala Akademi exhibition. His favourite mediums are water colour, oil paint and acrylic. For Rasheed, art is a way to depict the human experience in all its intensity Rasheed strives to excel in what he does. For him, perfection is a goal and aiming for perfection constantly is a way of life.

Susanth Beypore is an alumnus of Calicut School of Fine Arts. Later, he left the profession and switched his career to a graphic designer. He doesn’t restrict himself to painting but forays into the medium of sculpture as well from time to time. He uses water colour, acrylic, mixed media and oil paint to express his thoughts and share his feelings. A regular participant in art exhibitions, Susanth has participated in some of the most prestigious art exhibitions conducted in Kerala.

Shaf Beypore hails from Beypore. Shaf completed KGCE from Calicut School of Fine Arts in 1998. Ever since, he has been active in advertising as creative artist and television films and serials as art associate. Over the years Shaf has participated in many exhibitions. He is specialized in abstract painting and his favorite mediums are water color, oil paint and acrylic. Some of his highly recognized paintings are ‘vellicham ’, ‘Beypore view’, ‘pulluvan pattu’ and ‘Dubai street’

Dhanesh is born in Kumily, Kerala. Right from younger age he got attracted to pencil sketching and water coloring. This passion has won him lots of prizes in interschool competitions even at state level. The interest took him to Government college of fine arts for his Bachelor degree in Fine Arts withy specialization in applied art. Dhanesh is currently working in Dubai as an Art Director and finds time to follow his passion.

Uday Russelpuram’s life is dedicated for art. Trained by the eminent artist Mr. K.K. Nair at Prathibha Institute of Fine Arts, Trivandrum, Russel has diploma in fine arts. An experimenter by temperament, he enjoys various types of painting. However, he is particularly passionate about sand art, a rare form of art which is pursued by only a handful of people. Imaginative and intuitive, Uday, with his unmatched talent, dedication and hard work has created wonderful art forms in sand. Breathtakingly beautiful and distinct, his works leave a lasting impression on the viewers.