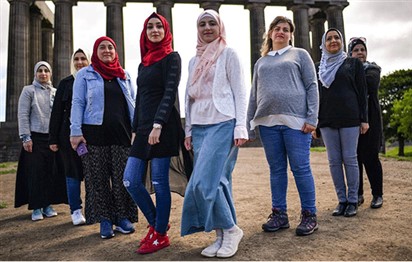 The modern tragedy of the eight-year Syrian war is woven into a 2,400-year-old Greek epic

Syrian refugees forced to flee their homes during the eight-year civil war will take to the stage in Scotland next month with their stories of homelessness, loss and torture in a retelling of a 2,400-year tragedy about the victims of armed conflict.

The accounts of the 18 Syrians are woven into The Trojan Women, a tragedy by the Greek playwright Euripides, which recounts the trials of the women left behind after their husbands are slain during the Trojan War.

The Syrians are currently living in Glasgow, Scotland, and have been brought together by a shared desire to tell their stories for a project aimed at helping them come to terms with a conflict that has destroyed their lives.

But plans for a tour of Scotland have been scuppered by a funding crisis after a series of prospective donors dropped out. The play is now focused on a single night in Edinburgh in August during the largest arts festival in the world.

The Syrians taking part in the play include Mohammad, a tailor from Damascus whose home was destroyed at the start of the war when his father was killed.

He retreated to a basement where he lived for two years looked after by a neighbour before he was arrested and tortured by the regime.

On his release, he married his neighbour, Maisaa, and they moved to Scotland via Egypt. They have a daughter Judith, named after an aid worker who helped them in Egypt.

“I honestly didn’t care if I lived or died,” he said in a statement. “But with this play I have found a voice. Finally I felt I could speak without fear.”

Other members of the Syrian cast of men and women include entrepreneurs, taxi drivers, tailors and a clinical psychologist. The play was first performed in Jordan in 2013 but shifted to Britain after the 2015 migration crisis with an estimated five million people having fled the country.

Charlotte Eager, co-founder of the Syrian Trojan Women Project, said rehearsal sessions had allowed those affected to talk about their losses.

“They were really sharing their stories. Mohammad said he was terribly upset when he told his story then he felt a weight had been lifted from his chest. He said he felt no longer alone in the world.”

The play will be performed in Edinburgh on August 7.

New book on ‘Celebrating Tolerance’ in the UAE launched