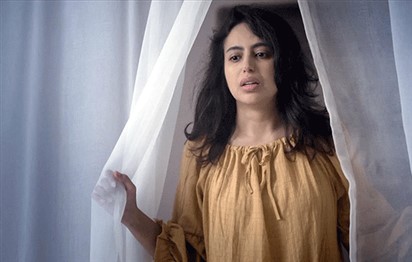 Emirati director Nayla Al Khaja has finished shooting what she’s intriguingly referring to as a “teaser” for her highly anticipated feature debut, The Shadow, a horror based on events the director herself witnessed.

During the three-day shoot, Al Khaja and a cast and crew of more than 50 people filmed in several locations, with the most memorable being a mansion in Jumeirah, Dubai, which Al Khaja describes as “the creepiest place you can imagine”. The result was three complete scenes from the final film, which Al Khaja says could stand alone as a short film. The scenes are now in post-production and will be screened at a launch event in association with Vox Cinemas in September.

The teaser will be shown to an invited audience of media and, crucially, potential investors, who Al Khaja says she hopes will be tempted to provide the funding necessary for her to complete her movie.

The director is understandably pleased to have her first feature under way. She has dedicated a lot of time to moving on to a long-form film after making a series of well-received shorts, which date back to 1996’s Sweet 16. But she isn’t only excited about the movie itself.

“Here, 12 women unite [on the cast and crew] to create something so vivid, it’s amazing,” she says. “Worldwide, only five per cent of women directors specialise in this genre.” Al Khaja says she hopes to inspire more women in the region to follow her lead and venture into filming difficult topics.

“The UAE lacks female feature film directors of a certain calibre, and it’s about time we see a change in this category,” she says.

Al Khaja says her latest film features three women delivering impressive performances in leading roles, while there are also many women among the crew. But one woman stands out in Al Khaja’s mind, executive producer Rita Dagher, who is the former head of acquisitions at international indie production and distribution company Wild Bunch. Her previous production credits include global hits such asFahrenheit 9/11, Four Lions and A Prayer Before Dawn, and Al Khaja clearly has high hopes for their partnership.

“Rita coming on board is a huge deal for me, because she’ll be spearheading the feature and its distribution, and we already have a really cool strategy working ahead,” she explains. “I’m over the moon about my first feature, but I’m even more excited it’s in the right hands. I didn’t want to make a local film that simply screens locally and has a short lifespan. So it’s great to have someone on board that already has vast experience of distributing films outside the region that could help make something that could travel, someone that could already have pre-emptive negotiations for distribution under way before the film is even made.”

Working with the local industry

Al Khaja benefited from fortuitous timing when it came to getting French producer Dagher on board, because she has recently arrived in the region to take up the role of creative producer at the newly formed Arabic production house Yalla Yalla. The company was created by a partnership between Dubai-based indie distributor Front Row Filmed Entertainment and UK production house Rocket Science.

The Shadow is unrelated to that project, but Dagher has clearly jumped at the chance to get her teeth into the local industry. Al Khaja admits she was a little tense around the big hitter at first. “I was really nervous having her on set because she’s made over 22 features,” Al Khaja says.

“She’s a heavyweight, so I was a bit on edge thinking she’d be judging me, but after three days on set she said she was really pleased with the way everything had been handled, so that gave me a nice boost in confidence.

“Rita doesn’t mess around, so for her to like my work and trust me – it’s a big deal for me. It’s like a stamp of approval from someone who really knows their craft.”

Who she’d like to see star in the film

The addition of Dagher to the project also means that some big names are in the frame for the film’s English-­speaking lead, too. The dialogue will be about 60 per cent in the Khaleeji dialect with local actors taking on the role, while the rest of the script is in English thanks to a British therapist being among the key characters.

No firm decisions have been made about casting yet, but Al Khaja says high-calibre actors such as Jeremy Irons have been mentioned in hushed tones during production meetings. There’s a further dash of Hollywood stardust behind the camera too, with The Shadow cinematographer Mik Allen able to list films such as Love, Actually and The Mummy among his many credits.

The Shadow certainly sounds an intriguing project, but there’s one thing the director is keeping her lips sealed about: that mysterious real-life plot line.

Understandably, Al Khaja doesn’t want to ruin the surprise, although she’s at pains to point out that she’s “thankful for all the support we have received from those who participated in the real events.”

Beyond that, it looks like we’ll have to wait until teasers are screened, funds are raised and A-list thespians are cast until we can find out more about this real-life piece of UAE horror folklore.

From humble beginnings: this Palestinian museum in the US has big ambitions