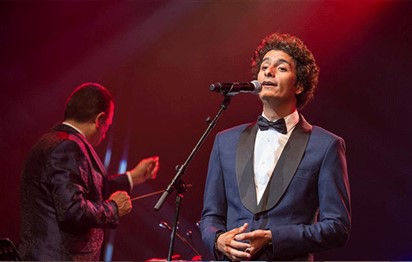 The Arabic pop music scene is running in an inverse pattern.

On one hand, you have veteran stars such Amr Diab, Elissa and Najwa Karam all releasing polished albums full of modern productions twists. While on the other, you have a growing number of young talents seeking inspiration from the past.

Meanwhile, Moroccan teenager Hamza Lebayed is building his career on the back of winning the last season of The Voice Kids. It was a feat achieved through his soaring takes of classic songs by Umm Kulthum and Sabah Fakhri. Also on the list is the Lebanese soprano and Umm Kulthum specialist Hiba Tawaji, and rising Egyptian star Mohamed Mohsen.

However, don’t tell the latter that what he and his colleagues are doing is a throwback.

“It is something that irks me,” Mohsen says, before a sold out concert on June 30 as part of Morocco’s Mawazine festival. “People keep telling me that we are bringing them back to a beautiful period in the past. I am not really secure with that term. The way that I look at it, you can make today beautiful. I am pleased with my artistic path and it has always been about going forward.”

Mohsen’s elevation to becoming one of the region’s most technically gifted singers, with an acclaimed recording and stage career, is as much down to nurture as it is nature.

The 33-year-old recalls a Cairo childhood different from the norm.

Where others kids played after-school football on the streets, Mohsen was at home listening to the music from Egypt’s golden age of singers, ranging from the aforementioned Umm Kulthum to Sayed Darwish to Mohammed Abdel Wahab.

This was further supplemented by going to neighbouring sheikhs to learn the vocal intricacies of Quran recitation.

Intriguingly, despite laying the seeds for his musical talents, Mohsen’s father had no plans to do with .

“He was a policeman and he really wanted me to continue the family tradition and join the armed forces, but I had another path,” Mohsen says. “He was a cultured man and a talented calligrapher. When he got home from work, he would work on his designs with the radio playing songs by these classic singers. These songs and voices kind of seeped into me.”

These musical inclinations bloomed during his college years, where he became active in Cairo University’s theatre company.

“It taught me a few things about the creative process and generally that there are different motivations behind being an artist,” he explains. “On one hand it is about following and maybe improving the current trends happening today, or to create based on what interests you. I am firmly in the latter school in that I love to sing these kinds of songs.”

A key feature of these compositions, Mohsen states, is that they are all encompassing and that no facet of the songwriting process is left to chance.

“If you look at the songs by Umm Kulthum and Mohammed Abdel Wahab and many others, every pillar of the song is honoured,” he says. “And for me, the heart of it is the lyrics, which always meant something.”

It is a principle he applied to the recording of the original songs that made up his debut album Habayeb Zaman. Quietly released in 2017, the album is gradually gaining listeners on the back of Mohsen’s enchanting live performances.

“All the songs here were thought through. The lyrics are often written as poetry first which we discuss at length,” he says. “Once me and my team are satisfied with it, we then write the composition and then we add the production touches.”

While most artists would claim they are fond of playing their own tunes, Mohsen is not that fussed. Content in his role as a revivalist of an increasingly forgotten music tradition, he is pleased that a younger audience are seeing his shows.

“I want them to known what these great singers did for Arab culture,” he says. “I want them to know that people like the great composer Sayed Darwich actually composed Egypt’s national anthem, as well Zuruni Kol Sana Mara (Visit Me Once a Year) which people think is a Fairuz song.”

As well as on the stage, Mohsen is also safeguarding that tradition at home. Just like his father, Mohsen is inculcating a love for these classic songs in his three-year-old daughter Dahab.

“I only know what worked with me. So I am following the lessons my father, may God bless him, gave me,” he says. “He developed my ear and an appreciation of the arts. This something that I am keen to give to the next generation.”

Ancient Gilgamesh tablet back in Iraq after three decades