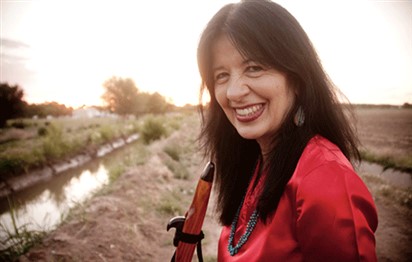 Commenting on her win, Harjo said: “I’ve been an unofficial poetry ambassador on the road for poetry for years. I’ve often been the only poet or Native poet-person that many have seen/met/heard. I’ve introduced many poetry audiences to Native poetry and audiences not expecting poetry to be poetry.” Moreover, Harjo pointed out that she wants to bring the contribution of poetry of the tribal nations to the forefront and include it in the discussion of poetry. “This country is in need of deep healing. We’re in a transformational moment in national history and earth history, so whichever way we move is going to absolutely define us,” she pointed out. In one of her poems, Harjo writes: “But then, you take a breath, all the way from the center of the earth and blow. All that heartache is forgiven.”

Harjo considers her win a great recognition of the Native American population in the United State. “We’ve been so disappeared and disregarded,” she said.

Harjo succeeds Tracy K. Smith as the nation’s 23rd Poet Laureate Consultant in Poetry. The announcement was made by the librarian of Congress, Carla Hayden, who said in a statement about Harjo: “To her, poems are ‘carriers of dreams, knowledge and wisdom,’ and through them she tells an American story of tradition and loss, reckoning and myth-making. Her work powerfully connects us to the earth and the spiritual world with direct, inventive lyricism that helps us reimagine who we are.”

It is worth mentioning that Harjo has written eight books of poetry, including ‘In Mad Love and War’, in addition to a memoir and two books for young audiences. Her next book of poems, “An American Sunrise,” will be published by in the autumn of 2019. Harjo describes writing poetry as a kind of music — like making a fire by slamming two rocks together. “You hit words together with rhythm and sound quality and fierce playfulness,” she says.

But in terms of subject matter, she sees poetry as “an immense conversation of the soul.” She says she’s driven by “justice and healing and transformation. Her work often merges the global and the personal, the imagery of the natural world and that of the inner one. She speaks often not only of the diversity of humanity, but also of its unifying story, its oneness.