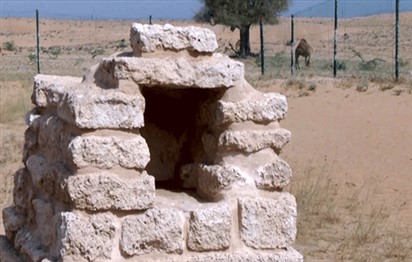 With its programme of conservation of the pre-Islamic temple at the 2,000 year old archaeological site of ed-Dur now completed, the Department of Tourism and Antiquities of Umm Al Qaiwain is now keen to have the temple and the whole area of ed-Dur inscribed on the World Heritage list of UNESCO.

The temple was first excavated over thirty years ago by an archaeological team from Belgium’s University of Ghent. The team also excavated a number of other features across the site, which covers several square kilometres. The main period of occupation at ed-Dur dates to the 1st and 2nd Centuries AD, although there is evidence elsewhere in the area of occupation dating back to the early Bronze Age, around 3,000 BC and to the Neolithic period, around 5,000 – 6,000 BC.

During excavations, a stone altar was found within the temple, whose walls measure 8 metres by 8.3 metres. At the time it was found, the temple’s walls still stood nearly 2 metres high. Four other altars and a well were found outside the temple, suggesting that the area was a special precinct of some kind. The well was 1.2 metres in diameter and around 6 metres deep. On one of the altars, the excavators found an inscription in Aramaic a language used widely across the Middle East, including the Arabian Gulf, around the beginning of the Christian era. Although difficult to decipher, it almost certainly mentions the early Semitic sun god Shams, which is why the archaeologist believe that the temple was dedicated to Shams.

Following its original excavation, the temple was left unprotected, with deterioration of its walls while the fine plaster decorations surrounding the door decayed.

Recognising the need for a maintenance programme, the Department of Tourism and Antiquities launched a three-stage programme for conservation and restoration of the temple, in collaboration with the Ministry of Culture and Knowledge Development and the Sharjah office of UN-affiliate ICCROM, the International Centre for the Study of the Preservation and Restoration of Cultural property.

The first phase began in February 2016 and lasted three weeks, followed by the second phase, lasting a fortnight, in April 2016. A three-week final phase was completed during December 2016.

Flourishing for 200 or 300 years around the beginning of the Christian era, ed-Dur was a port-town that derived its wealth from trade across the Arabian Gulf and the Indian Ocean. It also had extensive trade links with the Mediterranean, as shown by metal artefacts and glass vessels imported from the Roman Empire, as well as coins and other items.