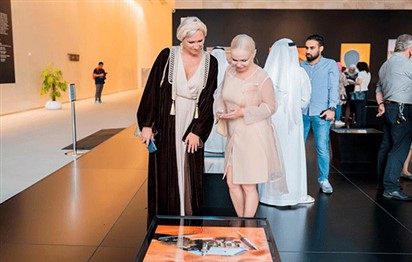 The best way to view the exhibition Above: Aerial Photography at Manarat Al Saadiyat would be, as the title indicates, from above. Or better yet, using a drone.

As it is, we must scan images displayed under our feet, on light boxes facing the ceiling or hung high on a wall.

This is intentional. “We want to create a new experimental experience for our public,” curator Bader Al Nomani explains. “When we see things at eye level we overlook elements, I wanted to bring in a bird’s-eye view”.

Al Nomani has gone one step further and laid out the elements of the exhibition in the shape of a drone. This exhibition is the first this year to be arranged by the Photography Studio at Manarat Al Saadiyat, part of their wider programme to highlight and examine different types of photography practised in the UAE today.

The focus here is aerial photography captured by drones, with works presented by 12 professional photographers, artists and drone enthusiasts living in the UAE, together with several inspirational photographs by Martin Sanchez, an artist from the US and founder of Visual Drone Art. Although he is well known in the field internationally, this is the first public exhibition of his work. Fascinated by aircraft as a child, Sanchez would draw planes or make them out of paper, and aspired to become a pilot.

But as he grew up, he developed an interest in the digital world, working in graphic and interface design, before combining his passions to train as a drone pilot. He gave a talk on the opening night of the exhibition and led a workshop on Reem Island the next day.

It was his first time in Abu Dhabi and he was astonished by the level of interest and commitment to drone photography here.

His compositions are playful and fun. “I give the medium a more artistic take, using the imagination to convert mysterious shapes and create illusions,” Sanchez says.

Reem Central Park is a colourful place given the recent public artwork commissions, and was the perfect canvas for Sanchez to help those who attended his workshop create eye-catching images. “When things like this happen in an urban landscape it encourages more people to come out and witness it,” Sanchez says. “It can be for the whole community.”

Sanchez’s works in Above are diverse and include shots similar to those taken in the Reem Island workshop, with lighthearted titles that refer to the illusions he asked his models to create, such as Don’t Look Down, USA and Hanging by the Pool – Argentina. Some also hint at a passion shared by the majority of drone enthusiasts: travel. Highlights include images he captured in Tanzania – Hungry Hippos and Follow the Leader, the latter of which shows a herd of elephants at sunset casting enormous shadows on the rough ground.

Other images document his time in Europe. Among them is Salty Selfie, a mesmerising shot of Sanchez standing in an algae-rich pink lake in Torrevieja, Spain, while No Way Out is a shot of Grasse, a town on the French Riviera, and Spanish Maze shows how drone images can act as an alternative guide through narrow, winding streets.

Other highlights in the exhibition include photographs taken by Dr Ahmad Al Rais, such as Ramadan brings us together, an abstracted pattern of people at iftar, and Peter Jay’s surreal juxtaposed images, such as It all starts with imagination, which shows someone in a bed in the desert waking up to a view of the Burj Khalifa.

Drones are increasingly hitting the headlines. Despite the first pilotless vehicles being built during the First World War, and frequently used in military operations since, commercial drones have only been permitted since 2006. Thepopularity of drones among the public has risen exponentially since 2013, when Amazon announced plans to use them as a delivery method. Interest in the UAE has been ­particularly high in recent years

But with Dubai International Airport being forced to close in February due to unauthorised drone activity and the ethical debate surrounding invasions of privacy still unresolved, there are clearly issues that need public discussion. As such it was a welcome addition to the exhibition programme to have Mouza Al Sawafi of the General Civil Aviation Authority feature on a panel discussion with four of the participating photographers.

“The UAE is one of the first countries to allow people to take pictures with drones,” Al Sawafi said. “Once you own a drone you have to register it or you will be liable legally. The registration process is simple through our app.” She also mentioned awareness campaigns the GCAA is running with schools and universities.

The photographers on the panel learnt how to operate a drone through conversations with friends, on the internet or by taking a day course at Sanad Academy in Dubai. “It starts as a hobby,” photographer Khalid Al Hammadi said during the panel discussion. “You reach a time when you want to make the shift to become a freelancer and then a professional. It is not a game and it is important to raise awareness on legislations and training.”

The photographers shared stories about difficulties they had with their drones. Problems normally result from low battery life, hot temperatures or not having the latest updates.

Noura Al Neyadi recalled being in a boat in the middle of the ocean and having an issue with a drone caught in a magnetic field, with the drone moving so much she almost suffered cuts to her fingers. Certain environments can be problematic for drone enthusiasts, and wildlife can also interfere with the machines. Al Neyadi described a time when she was filming at Jebel Hafeet and three falcons attacked her drone.

It is the responsibility of the drone operator to be aware of problems, but the positives of using drones far outweigh any negative experiences. Al Neyadi is exhibiting a stunning triptych in the exhibition titled Watched I, II, III, which is composed of 29 shots taken in front of a billboard close to Dubai Outlet Mall. “The wheel of creativity is ongoing, there is always something new,” she says

Bachir Moukarzel says drone photography allows him to capture remarkable images. “The world looks different from above. That’s what is so special,” says the photographer, who moved from Lebanon to Dubai in 2002

Serbia’s Beno Saradzic gave another talk on the opening night of the exhibition and showed his photographs of Qasr Al Hosn. The images offer a new perspective of the historical complex. The same can be said of Liam Clayton’s remarkable shot of Louvre Abu Dhabi’s dome.

Recording the UAE’s history using aerial photography seems vital, as are platforms such as this exhibition, which will help to raise awareness and appreciation of the medium.

Above: Aerial Photography at Manarat Al Saadiyat runs until August 26