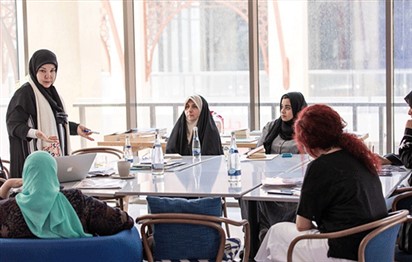 Warsha programme, the trailblazing initiative by the Etisalat Award for Arabic Children’s Literature, organised by the UAE Board on Books for Young People (UAEBBY) and sponsored by Etisalat Group, organised an interactive workshop titled ‘Tools for writing a successful children’s book’ , for authors and writers who applied to the 10th edition of the award, but did not win.

The workshop was designed to focus on the promotion of specific talents geared towards creating better quality Arabic children’s literature.

The three-day workshop presented by the award-winning Lebanese author, Nabiha Muhaidali, discussed key elements for writing quality children’s books, who referenced several examples from well-received children’s titles. The workshop also included critiques of books, including those written by the workshop’s participants themselves.

It tackled subjects, which every author should take into consideration before writing a children’s book. Whether authors should write what children want or what they want, key elements for a successful children’s book, targeted age group, and the challenges faced while formulating a plot or a background for the stories, were among the topics discussed. The objective of the discussions was to help authors develop a clear plan and orientation for their literary works.

Marwa Al Aqroubi, President of the UAEBBY, said: “Through this workshop, Etisalat Award for Arabic Children’s Literature wants to continue motivating and supporting our region’s children’s literature authors to have their names published on works that reflect the highest global literary standards, both in their written and illustrated content. Doing so will have an immediate impact on readership; an attractive book with an engaging story will always be picked up by a child. We want our children to learn about diverse topics and broaden their intellect through top-quality Arabic language books.”

“Warsha is a great platform for authors aspiring for knowledge, inspiration and success to meet role models in the fraternity. This workshop brought participants face-to-face with renowned Lebanese writer and winner of the Etisalat Award in 2009 and 2012, Nabiha Muhaidali, who shared her career experiences and vision of how she wants her contributions to enrich and elevate the genre of children’s literature in the Arab world. It is one of the most difficult genres because it requires more than just writing talent. Children’s authors must also have a deep knowledge and understanding of children’s psychological, emotional and intellectual needs,” she added.

Al Aqroubi highlighted the role of Etisalat and its continued support of positive initiative in communities to advance and unleash creativity in various fields notably in children’s literature. The award celebrates distinguished titles for children tackling contemporary topics, and nurtures publishers, authors and illustrators working in the Arabic children’s literature.

“Writing children’s books is not an easy task, but a very challenging one. When we write to this important segment of the community, we should pay attention to every single detail, whether it is language, ideas, plot or characters. The workshop that was conducted by Etisalat Award contributed to drawing the authors’ attention to these important aspects. It helped develop their expertise and experience and supported them with new technologies, which will enable them to create quality books that ignite children’s imagination,” she added.

HIPA showcases ‘Mosques of the World’ in photos