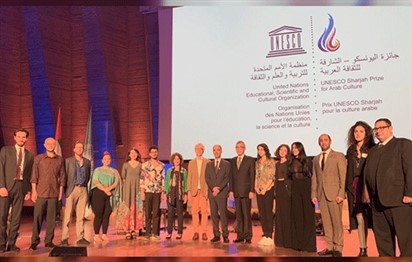 The Headquarters of the United Nations Educational, Scientific and Cultural Organization (UNESCO) in Paris has hosted an award ceremony to honor the winners of the 16th Edition of the UNESCO-Sharjah Prize for Arab Culture for 2018, which was awarded to the Samandal Society (Lebanon) and the Shabak Festival (UK). The award ceremony was held on Thursday evening, June 13,  2019.

The event was attended by the Deputy Director-General of UNESCO, Xing Qu, Abdullah Mohammad Al Owais, Chairman of Sharjah Culture Department, Issa Al Sahlawi, Chargé d’Affaires of the Embassy of the UAE in Paris, Mohammed Al Qaseer Director of Culture Affairs at the Sharjah Culture Department, officials from the Lebanese and British embassies and accredited representatives of the diplomatic corps in Paris, as well as French and Arab intellectuals and media personalities.

In his speech, Al Owais conveyed the greetings of His Highness Sheikh Dr. Sultan bin Mohammed Al Qassimi, Member of the Supreme Council and Ruler of Sharjah, to all the participants in the ceremony of crowning the winners of the Sharjah UNESCO Prize for Arab Culture, stressing that this award starts with a renewed offer to support and encourage those working in Arab culture, The objectives for which this award was established.

“Over the past two decades, the UNESCO World Heritage Platforms have witnessed the birth of world-class cultural institutions and institutions that have contributed to the service of Arab culture. Today, in a new chapter of the award, we celebrate the honor of the Lebanese Association of Samandal and the Shubbak festival of contemporary Arab culture (United Kingdom) to join the list of winners of this award which was established in 1998 to mark Sharjah’s selection as the capital of Arab culture, in a cultural march sponsored by Sharjah, that aims at promoting human culture and building bridges of cultural dialogue to serve communities. Sharjah’s cultural journey was also recognized when it was named as the ‘Capital of Islamic Culture’ in 2014 and as ‘World Book Capital’ in 2019, which has been a great achievement for the UAE.” In conclusion, Al Owais commended the fruitful cooperation between the UNESCO and various cultural institutions in the UAE and praised its role in making such joint events and activities a success.

For his part, Qing Chu expressed his happiness at the great role played by the award, which is being offered by Sharjah to support creators who serve the Arab culture and are working to spread the culture of moderation and coexistence among civilizations. He also expressed thanks and appreciation to the great cultural and humanitarian efforts of His Highness Sheikh Dr. Sultan bin Mohammed Al Qassimi, Member of the Supreme Council and Ruler of Sharjah on the Arab, regional and international fronts.

It is worth mentioning that the Samandal association is a volunteer-based NGO dedicated to the advancement of the art of comics for audiences of all ages. Founded in 2007, Samandal has published a large variety of books and magazines as well as hosting workshops and exhibitions at home and abroad. The association has won numerous awards.

On the other hand, Shubbak Festival : A Window on Contemporary Arab Culture (United Kingdom of Great Britain and Northern Ireland) is Europe’s largest festival of contemporary Arab culture. Founded in 2011, the Shubbak festival takes place every two years connecting London and the United Kingdom to the best of contemporary Arab culture through ambitious programs that span the visual arts, film, music, theatre, dance, literature, installations and debates. Working with practitioners and arts institutions in London and abroad, the festival celebrates Arab artists on the international scene. By focusing on personal expressions of artists, the Shubbak festival champions a multiplicity of voices and a diversity of nuanced viewpoints, which stand in contrast to the dominant media’s conflict-focused narrative on the Arab world. It promotes the innovation and creativity of Arab artists to inform and inspire the widest possible audiences in the UK and around the world.

50 days to inaugural of Sharjah as World Book Capital