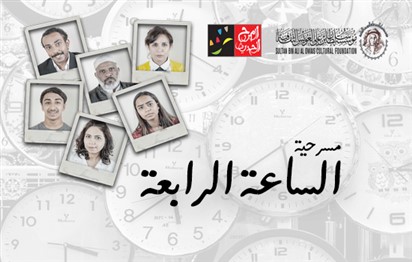 The Sultan Bin Ali Al Owais Cultural Foundation will host a performance of ‘Al Sa’a Al Rabi’a’ (Four O’ Clock) on Wednesday, June 19, 2019. The play, which was performed by the Sharjah Modern Theatre Company at the 29th edition of the Sharjah Theatre Days Festival, is written by Talal Mahmoud and directed by Ibrahim Salem.

The play is based on ‘Toc Toc’, a play by French playwright Laurent Baffie, which sheds light on the lives of several characters struggling with obsessive compulsive disorder (OCD). Among these characters is Fuad, a man in his late forties who suffers from OCD leading him to constantly curse while talking, Jaleel, another man in his mid-thirties also suffering from OCD, and Sami, a young man in his twenties who is delusional and has a phobia that makes him avoid walking on pavement lines. Other characters in the play include Manal, a gym instructor in her twenties also suffering from OCD and repetitive speech, Yara who works in sanitization and suffers from obsessive/compulsive cleaning, and Asmahan, who works as a receptionist at the psychiatric clinic.

The action is set in the waiting room of Dr. Nader’s psychiatric, where the five characters meet as each of them waits for their turn to meet the doctor, with a clock on the wall pointing to twenty minutes to four. The conversation between the characters reveals the problem each of them is suffering from and their realization that the solutions to their problems are not to be found in this clinic but rather elsewhere.

It is worth mentioning that the Sultan Bin Ali Al Owais Cultural Foundation has always supported local theatre productions in the aim of strengthening the role of drama in societal development. The Foundation has hosted numerous theatrical performances during its previous cultural seasons such as “Saheel Al Teen”, (Neighs of Clay), “Baita”, “Bahloul”, “Khafeef Al Rouh” (Light spirited), “Al Hallaj Waheedan” (The Lonely Al Hallaj) and “Majareeh” (The Wounded) among many other local plays that reflect the authentic identity of Arab culture and establish its presence in local society.

“Al Jawahiri as a Contemporary Poet”: A Symposium on the Legacy of Muhammad Mahdi Al Jawahiri at Al Owais Cultural Foundation