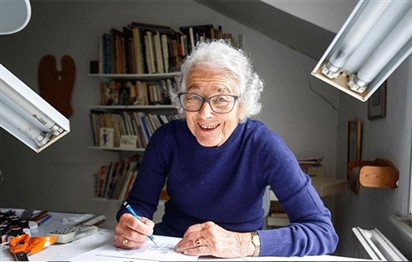 The author was battling a short illness according to her publisher

Judith Kerr OBE, the author behind beloved children’s book The Tiger Who Came to Tea, has died at the age of 95.

The news was confirmed today by Kerr’s publisher, who said the author had been battling a short illness.

“It is with great sadness that we announce that Judith Kerr OBE, author and illustrator of The Tiger Who Came to Tea, When Hitler Stole Pink Rabbit, Mog the Forgetful Cat and many other classic children’s books, died at home yesterday aged 95 following a short illness,” HarperCollins said.

Kerr only started publishing stories when she was in her 40s, dreaming up the tiger to amuse her two children. While went on to publish a number of other stories, the Tiger remained her most popular, reaching its millionth sale as she turned 94.

The author and illustrator had been named as illustrator of the year at the British Book Awards last week, and although she was not present at the ceremony, she was said to be “thrilled”.

Fellow authors and lovers of her book have been paying tribute to Kerr.

“Adieu, beloved friend & neighbour, bonus grandmum to our girls, gentle, wry, unique Judy,” said composer Howard Goodall in a Tweet. “Our hearts are heavy, yet you’d be urging us to tell stories, to live, laugh & love, unstintingly, with every breath we are given, as you did for 96 remarkable years. Ruht wohl #JudithKerr.”

Presenter Jonathan Ross said: “I doubt there is a more perfect children’s book then The Tiger who came to Tea. It was a huge part of my children’s life and I loved reading it for them. RIP #JudithKerr”

While comedian and presenter David Walliams added: “I am so sad to hear that Judith Kerr has died. She was a legendary author and illustrator, whose stories and illustrations gave pleasure to millions around the world, not least me and my son. Judith is gone but her books will live on forever.”

Kerr was born in Germany in 1923, where her Jewish father was an outspoken critic of the Nazi party. In 1933, the family fled to Switzerland, before eventually settling in England.

HarperCollins is set to release a new book by Kerr, The Curse of the School Rabbit, in June.