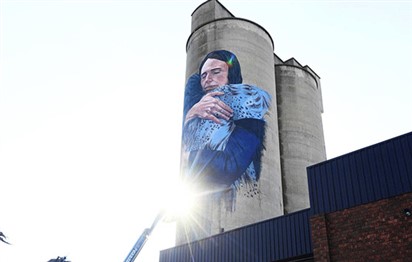 Street artist Loretta Lizzio has started work on her mural of New Zealand Prime Minister Jacinda Ardern, painted on a silo in Brunswick in Melbourne, Australia.

The piece was crowdfunded in less than 24 hours, raising more than Dh28,700 to paint the now-famous image of Ardern hugging a Muslim woman, with the Arabic for peace written beneath, after the March 15 terrorist attacks at two mosques in Christchurch, New Zealand.

“The image of Jacinda hugging a Muslim woman has become a beacon of tolerance, love and peace in these divisive times,” the GoFundMe page reads. “We want this message, this moment in time, remembered. We want to learn from it, we want it to hold us up, to strengthen us. We want everyone to know we are them, that they are us and, that we are, and always will be, stronger together.”

But efforts to paint the mural have not been without controversy. It faced backlash from Melbourne locals, who said it was not relevant to Australia. A second petition was launched to remove the piece, which garnered more than 15,000 signatures.

“11,000 dollars can go towards actual people, help the homeless and the hungry … not a mural,” one Twitter user commented, while another said: “All I am seeing is a lot of money being put into the wrong things, it should be helping people, and the earth”.

Artist Loretta Lizzio has donated her time to create the work, which is of the same image projected on to the Burj Khalifa in March, a week after the Christchurch attack.