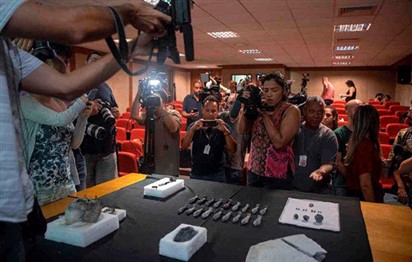 Brazil’s national museum says it has recovered 200 pieces from its Egypt collection after a devastating fire in September 2018.
The collection had 700 pieces and was the largest in Latin America before the fire.
The artifacts recovered include statues, vases and amulets that had been buried inside the casket of a mummy and hadn’t seen the light of day since the mummy was buried around 750 B.C.
The national museum’s director told reporters on Tuesday it is using money from the German government, an online fundraiser and from the previous government.
He says museum officials haven’t had contact with the new administration of President Jair Bolsonaro and that recovery efforts will soon run out of funding.
Officials blame the fire on an air conditioner that was installed incorrectly.

The artist as an algorithm: robot-made Rembrandt for sale