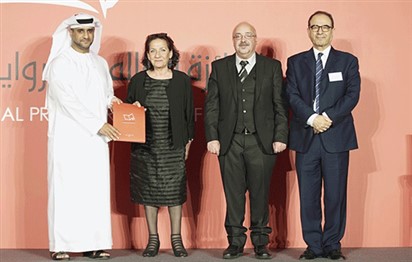 ‘Bareed Al Layl’ (The Night Mail) by Paris-based Lebanese author Hoda was selected from among 6 shortlisted titles to the International Prize for Arabic Fiction (IPAF) for 2019. The novel, published by Dar al-Adab, was named as this year’s winner at a gala ceremony held in Abu Dhabi on the eve of the opening of the Abu Dhabi International Book Fair. The monetary value of the prize is USD $60,000.

The ‘Night Mail’ tells the stories of those who have lost their homelands to war and who become homeless and lost in the world. It is worth mentioning that the jury of the International Prize of Arabic Fiction had shortlisted 6 novels from a longlist of 16 titles that were published in Arabic during the period from June 2017 and July 2019. Each shortlisted author will receive a monetary prize worth USD $10,000.

Commenting on her win, Barakat said: “I am very happy to be awarded this prize for a novel that I wrote in Arabic and the mere fact that I won an award because I write in my mother tongue is much more important to me than any prize or any recognition in the world”.

Barakat, who was born in Beirut in 1952, works in teaching and journalism and currently lives in France. She has authored has published six novels, two plays, a book of short stories and a book of memoirs as well as co-authored several books in French. Her works have been translated into several languages.

It is worth mentioning that Hoda Barakat had won the Sultan Bin Ali Al Owais Cultural Award in the ‘Short Stories, Novel and Drama” category for the 15th session (2016-2017).