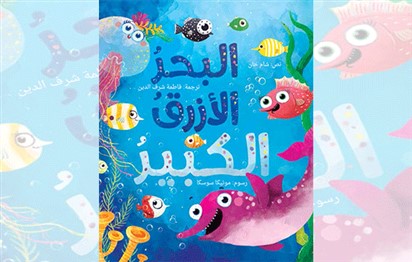 Kalimat, a subsidiary of Kalimat Group, a Sharjah-based publishing house specialising in publishing children and young adult books, has announced the release of its six new titles at the 11th edition of Sharjah Children’s Reading Festival,SCRF, being organised by Sharjah Book Authority,SBA, running from 17th – 27th April at Expo Centre Sharjah.

The newly published books have been written by prominent Arabic and International authors, and include Kalimat’s first silent book ”Al Hawa” by illustrator Fransisca Del Orto, along with other titles including ”My Crazy Socks” by Hanada Taha, ”Fushtakato” by Mariam Al Jamal, ”The Big Blue Sea” by Shame’ Khan, ”Fire Storm”, and ”Operation Rhino” by Lauren St John.

Marking the entry of Kalimat into the category of silent books, ”Al Hawa” expresses the idea of love in terms of forgetting, falling, and feeling love again. The story is told in form of a unique love story the embodies the idea of being consumed with life’s worries and troubles, and not being able to live up one’s dreams. However, a determination to succeed and continue to keep the dreams alive, saves the love story.

The other title ”My Crazy Socks” is a story of colorful and funny shaped socks, while ”Fushtakato” tells the story of a girl named Nagham, who is bored and insecure because everyone around her is busy with her new born little sister. Nagham takes to the habit of biting her nails, to seek attention. Later her mother comes up with a strange idea to help her get rid of this problem and she manages to have beautiful nails again. The core idea of the story explores the mind of the children in a very engaging way.

Another one in the list is an educative and entertaining board book targeting toddlers named ”The Big Blue Sea”, introduces readers to various species of marine animals in the Arabian Gulf. The book uses ‘memorization by repetition’ as a tool to encourage reading and remembering the story, and increases their self-confidence.

For young adult readers, ”Fire Storm” is the last of Lauren St John’s One Dollar Horse Series. It is a story of a rising eventing star Casey Blue, who has it all – fame and her champion horse Storm. Then comes Kyle, an equestrian coach who tries to change the way she trains her horse. The interesting story walks one through various characters and their intentions, as they prepare for one of the most difficult events, Burghley Horse Trials.

Another book on the list for young adults is ”Operation Rhino”, the last book of Lauren St John’s bestselling White Giraffe series. It is the story of the poachers, who attacked Sawubona’s white rhinos, leaving behind an orphaned calf. In the story, Martine, with her friend Ben, decides to take the rhino baby to a sanctuary near the Golden Gate Highlands National Park. The duo finds out that the sanctuary hides a precious secret – one that must be guarded from the poachers in Africa. Martine and Ben later find themselves fighting for their lives to save one of the rarest animals on earth.