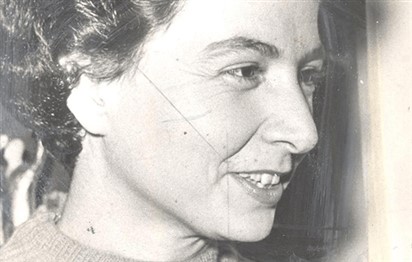 The artist was a pioneering women’s rights activist, and today would have been her 95th birthday

Egyptian artist and activist Inji Aflatoun (sometimes written as Efflatoun) was born into an upper-class Francophone family in Cairo in 1924, but her paintings were strongly inspired by the people of the Egyptian working class.

Efflatoun’s father Hassan was the founder of the entomology department and dean of the Faculty of Science at Cairo University, and her mother, Salha, served in the Women’s Committee of the Egyptian Red Crescent Society.

She was largely sheltered from everyday social issues as a young child, but said she was bothered by the sense of class structure in her strict Catholic school. She was then awoken to life’s harsh realities when she went under the mentorship of Egyptian painter Kamel El Telmissany at the age of 15: his work often satirised cultural norms. Her early work pictured a surreal and scary universe, with women running away from fires, dark imagery, storms and birds of prey.

She was also a pioneering feminist, who worked to ensure women’s rights were kept in mind as Egypt moved away from British rule up until the UK military made a complete exit in 1952. In the early 1940s she joined the communist movement, Iskra, and in 1945 she represented a Cairo group of women at the first conference of the Women’s International Democratic Federation in Paris.

She wrote two popular political pamphlets in 1948 and 1949 that linked gender and class oppression and explored the fact they’re both intrinsically connected to imperialism.

She was imprisoned by Gamal Abdel Nasser’s government in the mid 50s; friends smuggled crayons and oils to her in jail and Prisoners (1957) was one of the works she produced while there, it is now on semi-permanent display in Sharjah until at least 2023:

After her release in 1963 she dedicated most of her time to painting, and later in her career she focused on landscapes. Today, her work hangs in many museums and galleries around the world.

Today’s Google Doodle honouring her is on display only in the Middle East and North Africa, and is being shown to users in Morocco, Algeria, Tunisia, Libya, Egypt, Lebanon, Saudi Arabia, Iraq, the UAE and Oman. www.thenational.ae