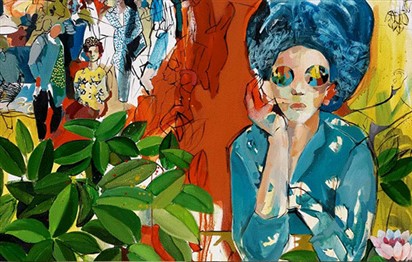 She’s referencing the 1990s New York art scene, when finding shows on Islamic art was near impossible, and finding Islamic artists building a contemporary art scene in their respective countries even harder.

What a turn-around for the books then, that almost 20 years later, Sand would be publishing a book on the recent developments of the Asian and Islamic contemporary art world.

“Today, like in so many other fields, the art world is no longer limited to two or three western cities. It has truly become more global and geographically balanced than ever before,” says Sand in the introduction to the hefty 800-page tome dedicated to the artists who are putting these previously overlooked regions on the map.

Evolution of the UAE art scene

There’s no denying that the cultural landscape in the UAE has developed (and is evolving) at great speed. In the past 10 years alone, Abu Dhabi has seen the opening of Louvre Abu Dhabi, the Etihad Modern Art Gallery, N2N Gallery and Abu Dhabi Art Hub; while Dubai has welcomed galleries such as Mottahedan Projects and Lawrie Shabibi, and the much-celebrated Art Dubai entered its 13th edition this year. It’s a rapid change from an almost non-existent art scene two decades ago.

“The title Contemporary Voices from the Asian and Islamic Art Worlds, comes from the idea that the artists give their voice, by themselves talking about their work, thus shedding light on an art domain that remains quite intriguing to the broader audience,” Sand tells me, when asked how the concept of the book came about.

A native of Switzerland, Sand is one of the first journalists to focus on contemporary Islamic and Asian art, perhaps by proxy, as she began to work for the Asian Art Newspaper in the 1990s.

A delve into the book reveals frank conversations between the author and her chosen artists (of which there are 87 in total) that move past just the work and into the lives and multitudinous backgrounds of each artist. This is a book not just about the contemporary art scene, but the tumultuous foundations it’s being built on.

“When your own life or your family is at risk, you do not really think about art,” Iraqi artist Ahmed Alsoudani tells Sand in an interview in the book.

“Art always remains attached to the economic situation,” he says of his native region and how a nation’s ­instability might well put a pause on a country’s artistic output or the development of its art scene.

He is just one of a number of artists featured in the book, which has built on themes and addressed issues being faced in their respective countries. “This active implication by artists through their work is extremely relevant as they present extensive knowledge of the situation at home,” Sand says, also referencing the likes of Shirin Neshat and Lalla Essaydi, who focus on the problems faced by women in the Arab world; Walid Raad, whose theme is often the consequences of war; and Newsha Tavakolian, who provides a glimpse into a city’s daily life.

Sand also shines a light on the interesting techniques and methods that are so synonymous with traditional art in the Islamic world.

She maintains that artists in these regions are drawing from what has gone before to create a new and contemporary mode of interpretation.

“Knowledge, ideas and influences are now tied into one another more than ever before,” says Sand, giving calligraphy as an example of an ancient Islamic art practice that has now been taken, adapted with new media, materials and the artist’s imagination to give an alternative perspective on what might otherwise be seen as an ancient and outdated practice.

“Both the Asian and Islamic art worlds had a tradition of fine arts spanning over centuries, and it seemed only a matter of time before these traditions were further revisited by contemporary artists,” says Sand.

“It is not just the output that has undergone great changes, but also the artists themselves who are now fully aware of the possibilities made available to them,” says Sand.

As for the nations supporting this contemporary art community, Sand says Iran supports its artists well. Meanwhile, the UAE is the place to look for a dynamic gallery and museum art scene, opening the work of its artists beyond its borders and also serving as platforms to artists from neighbouring countries. “The UAE possesses the necessary infrastructure and a realm of possibilities for artists to practise their art,” she concludes.