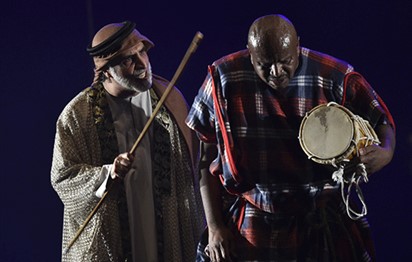 The play, which was previously staged at 3rd edition of the Gulf Theatre Festival, tackles the theme of slavery; and being slave to the self or to inherited traditions and customs, through employing elements of folk heritage and adding various symbols and connotations to them. Director Mohammed Al Ameri blends graphic techniques with elements and accessories from local culture and heritage, and brings together modern musical instruments with classic folk instruments such “Al Habban”, moving swiftly between various times and eras.

It is worth mentioning that the aforementioned play has won 4 awards at the 3rd edition of the Gulf Theatre Festival last February; with the Special Jury Prize being awarded to Emirati actor Habib Ghuloom, and the Award for Best Debut Role to actress Budoor, while the Best Script Award went to playwright Ismail Abdullah and the Award for Best Music and Sound Effects went to Ibrahim Ameeri.

The Sultan Bin Ali Al Owais Cultural Foundation has always supported local theatre productions in the aim of strengthening the role of drama in societal development. The Foundation has hosted numerous theatrical performances during its previous cultural seasons such as “Saheel Al Teen” (Neighs of Clay), “Bahloul”, “Khafeef Al Rouh” (Light spirited) and “Al Hallaj Waheedan” (The Lonely Al Hallaj) among many other local plays that reflect the authentic identity of Arab culture and establish its presence in local society.