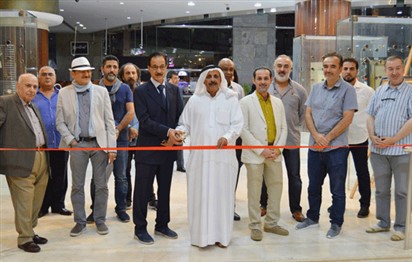 Activities of “Tamazoj” (Medley) exhibition by artist Dr. Riyad Matouq have kicked off at the Sultan Bin Ali Al Owais Cultural Foundation on Wednesday evening, April 10, 2019. The opening ceremony was attended by Dr. Mohammed Abdullah Al Mutawa, Member of the Foundation’s Board of Trustees and a number of artists, media personalities and enthusiasts.

The guests took a tour of the exhibition, which reflected depth of thought and showcased several aesthetic techniques that the artist explained to his audience, including making a medley of different elements and putting them in a furnace to take their final shape, bringing together strength, beauty and depth.

The exhibition included a number of murals and ceramic paintings that are known for their philosophical connotations despite their simple appearance. The size of the paintings on display varies between 30 and 50 cms, and are all characterized by a great sense of harmony. Artist Riyad Matouq uses clay, colors and other materials that make his artworks like medleys.

At the end of the tour, Dr. Mohammed Abdullah Al Mutawa, Member of the Sultan Bin Ali Al Owais Cultural Foundation’s Board of Trustees, presented artist Riyad Matouq with the Foundation’s commemorative shield and thanked him for his great efforts and wished him more progress and success. Morover, artist Riyad Matouq thanked the Sultan Bin Ali Al Owais Cultural Foundation for giving him the opportunity to display his work in such a prestigious cultural institution.

Dr. Riyad Matouq was born in Baghdad. He studied at the Academy of Fine Arts- Baghdad University, where he obtained  his PhD in Ceramics in 1996. He worked as a Professor of Ceramics and Murals at the Faculty of Arts and Architecture, the University of Darna – Libya during the period from 1997 to 2000. He also worked as a Professor at Baghdad University, where he taught practical ceramics, murals and clay sculpture.

It is worth mentioning that Matouq took part in a number of exhibitions both in Iraq and abroad and won several awards, including a Merit Award from the Iraqi Artists Syndicate in Baghdad, and the golden medal at the International Festival of Plastic Arts (Tunisia), and the Ceramics Award in 2004 from the Audio Visual Exhibition (Sharjah Arts Musuem) among many honors and awards.