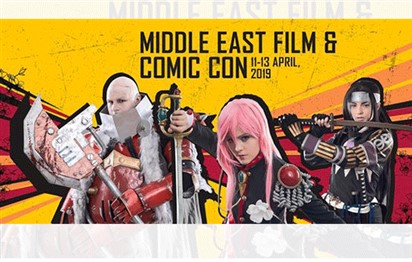 Middle East Film and Comic Con (MEFCC) is gearing up for its 7th consecutive year celebrating all things film and comic related, with tickets now available to purchase on Dubai Calendar’s website and app. Returning from 11-13 April at the Dubai World Trade Centre, residents and visitors will have the chance to delve into their fantasy worlds for three full days as they participate in a wide range of activities celebrating the electric energy of pop culture. This annual multi-genre entertainment and comic convention will offer a hub for different fan groups to attend ‘meet and greets’ with their favourite regional and international celebrities, enjoy live music and explore an awe-inspiring exhibition featuring more than 400 vendors.

This year’s Middle East Film and Comic Con (MEFCC) event will be the place to dress up as your favourite character and share your appreciation for the film and comic industry in an exciting world of superheroes and villains. Whether enjoying the rush of the fully committed cosplayers, getting first hand industry insights from your favourite celebrities, or grabbing limited edition merchandise, MEFCC is set to be an epic, must-see event sure to entertain anyone and everyone. In addition, this year’s line-up will offer fans a once in a lifetime opportunity to meet with international celebrities from their favourite movies and TV shows in the Meet the Stars area.

This year’s MEFCC will include ‘Game of Thrones’ star Iwan Rheon who famously played villain Ramsey Bolton. He will be joined by William Simpson, the show’s storyboard artist and original concept designer in a meet-and-greet and a Q&A panel, giving fans behind-the-scenes insights as well as activities and merchandise including a chance to win signed books by fantasy writer George RR. Martin. Leading actors including Katie Cassidy, Mike Colter and The Walking Dead’s, Ross Marquand are just a few of the stars who will also be there for ‘meet and greets’ as well as participating in group panels to share behind the scenes secrets. Fans can also watch previews of a selection of highly anticipated pre-released films.

The convention will showcase work from celebrated regional and international artists congregated at The Artists Alley. These leading professional comic and manga artists will be providing workshops on how to perfect your cosplay, as well as tutorials and sessions on creativity and animation, giving fans the chance to get personalised signed sketches.  Attendees can also get their hands on a variety of merchandise, as well as limited edition and exclusive collectibles only available at MEFCC.

If gaming is your thing, you can show off your skills and compete with the region’s top eSports players at the Games Con eSPorts Arena.  Fans will be able to play in tournaments and test out the latest software as they put the games to the test.

Full details can be found on Dubai Calendar’s website and app inviting residents and tourists to discover live events taking place in the heart of the city.

Napoleon’s sword, pistols sold at US auction for $2.9 mn

Discovering 150 years of library architecture at the Venice Biennale