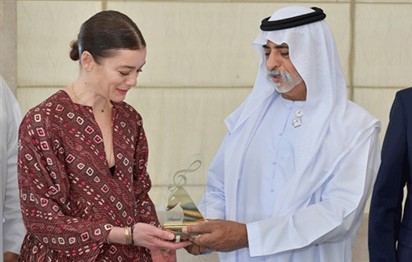 Sheikh Nahyan bin Mubarak Al Nahyan, Minister of Tolerance, and patron of Abu Dhabi Festival, presented the Abu Dhabi Festival Award 2019 to Aurélie Dupont, Opéra national de Paris Director of Dance, for her extraordinary achievements in ballet, and for her tireless work in advocating the arts.

The Abu Dhabi Festival wrapped its latest edition with a glittering performance by the Paris Opera Ballet this weekend. The acclaimed French company, that works on both performance and educational programmes, performed the neo-classical staple Jewels on March 29 and 30 at Emirates Palace.

Concluding the Festival, the oldest national ballet company brought a unique, full-length, three-act plotless ballet that uses the music of three very different and distinct composers, performed by the Pasdeloup Orchestra – the oldest symphony orchestra in France, conducted by Benjamin Schwartz. Jewels by master choreographer George Balanchine was inspired by the artistry of jeweler Claude Arpels, and the music cleverly reveals the essence of each jewel. Each section of the ballet is distinct in both music and mood. Emeralds recalls the 19th century dances of the French Romantics, while Rubies is crisp and witty, and Diamonds recalls the order and grandeur of Imperial Russia and the Mariinsky Theater.

The Abu Dhabi Festival Award reflects Abu Dhabi’s cultural vision, recognising and rewarding excellence in the arts and cultural landscape, contributing to the UAE as a global capital of culture, enriching its position on the world stage.