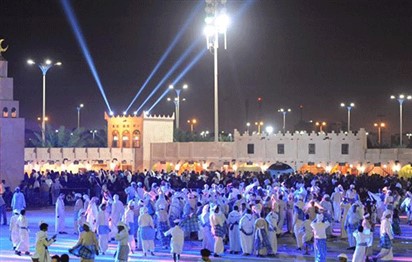 With its goal of transforming the country into a hub of culture and entertainment, the Sharqiah Season in the Kingdom of Saudi Arabia has been in full swing since last week, featuring 83 different programmes in eight different cities in the country’s eastern province, with the event being only the first of 11 major planned festivities in the kingdom this year.

Running until March 30, Sharqiah Season aims to boost the country’s national economy, diversify its portfolio and help in the creation of job opportunities for Saudi nationals.

The two-week event is expected to create 3,000 job opportunities for Saudi nationals and local entrepreneurs.

The major event is also seen as part of the country’s efforts in opening itself up as a destination for international tourists, with Saudi Crown Prince Mohammad Bin Salman spearheading such efforts.

Among the leading international artists that have been involved in Sharqiah Season included household names such as Pitbull, Akon, French Montana and Deadmau5, highlighting the country’s entertainment authorities seriousness in putting the kingdom on the map when it comes to major events.

Along with the musical performances, the season has also boasted a unique line up of programmes such as the Red Bull Air Race, Formula 1 H20, the Saudi Bike Show, the Cirque Eloise, the Bollywood festival, the Leonardo Da Vinci Exhibition and the Saudi Film Festival among many others, ensuring the season brings the full package when it comes to entertainment options.

The Sharqiah Season is also putting a focus on education and business, with events such as the Al Ahsa Investment Forum 2019 and the Saudi Robotics Conference.

Experiential and educational entertainment is also available with the Immersive rig experience and the upstream immersive experience which showcase the extraction and effects of energy.

Cities like Dhahran, Jubail, Hafar Al-Batin, Nuairyah and Khafji will see programmes that blend education and sports with entertainment and culture similarly with Ithra Lab, and the Saudi Robotics Conference and Exhibition, with the addition of sports-related events such as activities for special needs, the Aqua Bike Kingdom Championship and the Sailboat Race Kingdom.

Cultural events are also playing a big role in the season, with at least 33 of the programmes being focused on the eastern region’s local heritage and customs.

The country’s eastern province is known for several archeological and historical sites such as the Al-Ahsa Oasis, which has been named as a UNESCO World Heritage Site. The city has also been named as the capital of Arab tourism for 2019.

Noon Art Award is back with the theme ‘After the Rain’