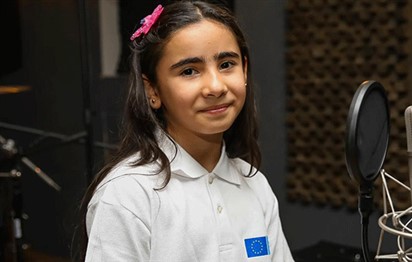 On March 15, it will be eight years since the war in Syria began, with conflict, bloodshed and displacement devastating families across the Middle Eastern nation ever since.

However, Unicef is hoping to help quell, even for a moment, the fear felt by children of the war-struck country through its latest endeavour: music.

The global non-profit, which works to provide aid and support to vulnerable children and mothers across the world, has launched its first-ever children’s songs album, with help from the European Union.

11 features decades-old childhood classics, revived for the album and sung by children from Syria and neighbouring countries. The album was composed by Lebanese musician and actor Jad Rahbani, who rearranged beloved children’s songs from the 1970s, originally written by his father, Elias Rahbani.

Jad worked with the children to bring his compositions to life, after having first recorded the Arabic-language songs when he was a child himself, with his brother Ghassan, in 1976.

“I remember the impact these songs had on me when I was a child and how much they helped me overcome the fear I felt during the war in Lebanon,” he said in a Unicef statement. “This is a very special project and I do hope that this album will bring joy to children and fill their hearts with positive energy.”

Children from Lebanon, Jordan and Turkey, as well as Syria, learnt and help record the tracks over a series of 11 workshops, with nearly 300 kids taking part in total. The project hopes to provide emotional support to children living with conflict with the album.

“Syrian children have endured what no one should witness. Many are left with invisible scars,” said Geert Cappelaere, Unicef regional director for the Middle East and North Africa. “Psychosocial support, including through a project like 11 with music and art, has proven to help children cope with the shocks they’ve lived through and gradually reconnect with their childhoods.”

The album will be delivered free of charge to schools, clubs, music academies and recreation centres across the region. Unicef hopes to distribute one million copies of 11by the end of 2020.

“Without such support, children risk carrying their wounds unhealed with severe consequences when they become adults,” added Cappelaere.

In the frame: The story behind Ai Weiwei’s Fountain of Light at Louvre Abu Dhabi