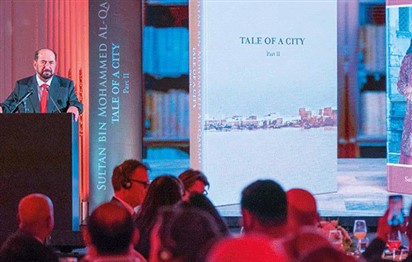 His Highness Dr Shaikh Sultan Bin Mohammad Al Qasimi, Supreme Council Member and Ruler of Sharjah, has stressed that the writing of historical stories in a good and smooth-flowing manner contributes to readers’ understanding and acceptance of historical content without getting too lost in detail.

The statement came during a London launch of two of Dr Shaikh Sultan’s history-based works translated to English. These include the Sharjah Ruler’s latest book, Bibi Fatima and the King’s Sons and Tale of a City.

While addressing the attendees at the book launch ceremony, Dr Shaikh Sultan, noted: “Historical writing always presents a quandary. Should we write it in a fictional or more factual way? History is not easily palatable for everyone, especially for people who are not accustomed to serious academic content. However, if we write history in the form of a story, the events will be clear and acceptable, and ultimately, serve the purpose of documenting history.”

He said he is about to release a new book about geography. “It talks about the origins of geography, and who invented it. There are many saying that Arabs were behind it, however, I say no. Geography started with the arrival of Alexandre III of Macedon (Alexander the Great) to Persia. The Persian King Darius sent an army commander to scout a route to India. At that point they started to document the geography. Nearchus and Ptolemy (Ptolemaeus) produced the first map of the gulf. And when Alexandre III of Macedon (Alexander the Great) saw Musandam Mountains, he asked Nearchus about it, to which the later said ‘The Gulf of fish eaters,’ and it was documented onwards with that name.”

The Sharjah Ruler emphasised: “The paradox is in that period, Alexandre III of Macedon (Alexander the Great) was chasing Darius, who occupied the Musandam Coast that makes up what is now the emirate of Sharjah all the way up to Ras Al Khaimah. At the same time, Malek Bin Fahm came from the southern side of the Arabian Peninsula and conquered Oman, where a fierce battle took place and Darius was defeated.

“In 1730, an author wrote a geographical book, The World’s Empires. He spoke about the Empire of China and other empires, and in his description of the Persian Empire, he has talked about the coast near the Strait of Hormuz where Alexander the Great and his officer Nearchus had a meeting. The author named this place ‘The Coast of Fish Eaters’ that Darius occupied. It is clear that this author does not read Latin very well because he said that Darius occupied it… It is Darius’s homeland, so how can he occupy it?!

“Actually, after Tale of a City, I am investigating this in a brief working title, Historical Errors in Geography.”

Dr Shaikh Sultan continued: “Arrian of Nicomedia (Arrianus) wrote this book, Indica, which means India, utilising what Nearchus wrote. The book is now at the British Library. However, when Ptolemy (Ptolemaeus) came, he collected many books and devised marvellous measurements such as the time difference between the UAE and Alexandria, which was in the wake of early Christianity.”

He said that Ptolemy did not really draw maps, but used descriptive writings to bring them to life. Someone found Ptolemy’s manuscript in Constantinople at the time of Mehmed II (Mehmed the Conqueror), so he took it and asked an artisan, who is a cartographer, to draw a map in 1445 after the fall of Constantinople.

His Highness added: “The cartographer said that he sent one map to the Vatican, and one to the Ottoman Sultan, and kept one with him.

“I went to the Vatican, but they refused to give me a copy of that map. A renowned company managed to get a copy of the map in 1932, and the wife of the company owner gave me a copy.”

In his address, Nicolas Green, Member of the International Institute of Geography, introduced Tale of a City, praising the beautiful construction and the way the region and its cities were addressed in thorough details that highlighted many social conditions that added a significant value to the book.

George Michael’s art collection to go under the hammer