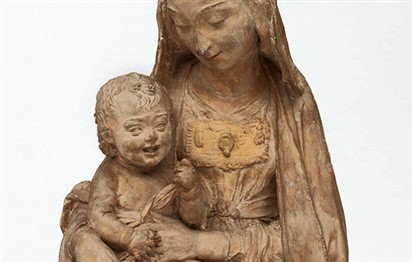 For centuries, rumours have circulated that Leonardo Da Vinci also created sculptures, but no three-dimensional works by the Italian artist, inventor and scientist has ever been identified. Until now, in the year of the 500th anniversary of his death.

This week, Italian curators have unveiled what they believe is the only surviving sculpture by Da Vinci at an exhibition in Florence, reports The Guardian.

Until July 14, 2019, you can see the small terracotta sculpture in all its glory, along with 120 paintings, sculptures and drawings that celebrate Da Vinci’s tutor, Andrea del Verrocchio, at an exhibition called Verrocchio: Master of Leonardo, at Palazzo Strozzi.

The Virgin with the Laughing Child, which stands at 50 centimetres tall, had formerly been wrongly attributed to Italian sculptor Antonio Rossellino and has been part of the collection at London’s Victoria and Albert Museum since 1858. It was credited as such by the influential art historian and British Museum director John Pope-Hennessy. And it seems his authority on such matters, even posthumously, kept experts guessing until 2019, says Francesco Caglioti, the Italian academic who is leading the new attribution. The scholar, who teaches at Naples University and created a catalogue of the Louvre when he was just eight years old, is known for his unrivalled knowledge of 15th-century sculpture.

Caglioti, along with the renowned Da Vinci scholar Carmen C Bambach, from the Metropolitan Museum in New York, believes this is Da Vinci’s handiwork. Two specific details point the pair to such a conclusion: the draperies over Madonna’s legs are similar to those in other drawings Da Vinci made at the time; and baby Jesus’s face takes on a realistic quality the artist was known for creating.

It is thought that Da Vinci created the sculpture around 1472, when he was aged 19 or 20 and still a student of Verrocchio, who is remembered as an emblematic artist of the Florentine Renaissance. Da Vinci was his most famous pupil. As Jonathan Jones writes for The Guardian: “It’s clearly influenced by Verrocchio, the sweetly graceful artist of tender Madonnas and frolicking cupids. But at the same time, it has a wild touch that’s different from his.”

In particular, the laughing baby Jesus is unusual among 15th-century art. In fact, at the time, it could have been considered as blasphemous. “Leonardo was the artist who revolutionised how children were portrayed,” Jones continues, “who paid attention to play and fun in a new way.”

Da Vinci was still young when he is believed to have created this sculpture. It’s not a masterpiece, but an uncovered milestone in a genius’s oeuvre that allows us to understand the artist better. The Renaissance may have just experienced a rebirth.

US gold coin sells for record $18.87 mn at Sotheby’s auction