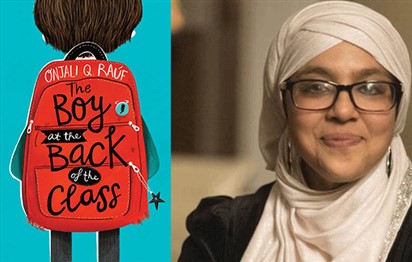 Onjali Q Rauf’s The Boy At The Back Of The Class won best story in the 2019 Blue Peter Book Awards.

A children’s book about a Syrian refugee has been named one of the winners of the 2019 Blue Peter Book Awards.

Onjali Q Rauf’s The Boy At The Back Of The Class, which tells the story of Ahmet, a nine-year-old Syrian who moves to a new school after fleeing his war-torn homeland, won best story.

Rauf said: “What a wonderful, surreal, and truly epic honour it is to win this wonderful award! I can hardly believe that my childhood dream of owning a Blue Peter badge one day has come true in the most unexpected way possible!

“I am utterly bowled over by the love and support The Boy At The Back Of The Class has received, not just from the marvellous Blue Peter judges, but all the children who voted for its place as a winning title this year – thank you.”

Gifford said: “To be recognised by a show I watched and loved as a child (and still do as an adult) is a remarkable thing. I’m tickled pink! I want to thank all the children who voted for The Colours Of History.”

The Blue Peter Book Awards, managed by reading charity BookTrust, honour the best in children’s literature each year and were voted for by 300 children from 12 school in the UK.

The two winning authors will appear on a special World Book Day edition of Blue Peter on Thursday.

They will be joined by the award’s judges, author and illustrator Alex T Smith and author and vlogger Louise Pentland.

Smith said: “It’s been an absolute pleasure to be part of the Blue Peter Book Award judging panel this year, and such a delight to work with the other judges.

“It was a very competitive shortlist with brilliant titles, and it was a very close call but we think the students have made a fantastic decision!”