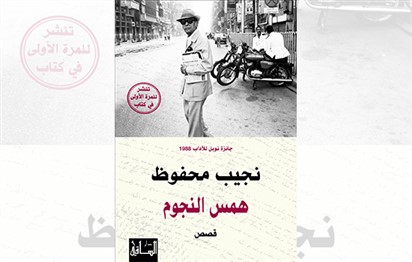 Thirteen years after his departure, late Egyptian author Naguib Mahfouz returns to tell his stories about the alleys, coffeehouses and marginalized characters, through 18 stories that had not hitherto been featured in any of his previous books. The stories were compiled and released in a new publication by Egyptian journalist Mohammed Shu’air, a book enthusiast and a fan of the late Mahfouz.

According to ‘Al Arab’ newspaper, the new short story collection, titled ‘Naguib Mahfouz… Whispers of the Stars’, was published by Dar Al Saqi (Beirut) and includes stories that were published by Mahfouz in a magazine in the 1990s but had never been published in book form. In addition, the collection includes a ‘literary gem’, according to Shu’air; which is a new unpublished story found with the heirs of Mahfouz.

At the preface to the book, Shu’air, who has reviewed and analyzed many of Mahfouz’s narratives, says: ‘When Mahfouz’z daughter,Um Kulthum, gave me a small box that contained some papers belonging to the late author, I felt as if I was about to explore an ancient Egyptian tomb. Among the papers in the box, I found a complete file with around 40 short stories that had not been published after Mahfouz wrote them, but which he published years later in Nisf Al Dunya magazine, so a total of 18 short stories remained out of all the editions of his complete works.

To dispel any doubts about the authenticity of these short stories, Shu’air includes a picture of the original manuscript in Mahfouz’s handwriting and preserves the original titles selected for them by the late Nobel laureate (1988). The titles of the shorts stories are ‘Mutarada’ (The Chase), ‘Tawheeda’, ‘Ibn Al Hara’ (Son of the Alley), ‘Nubu’at Namla’ (An Ant’s Prophecy), ‘Abuna Ajwa’ (Ajwa Our Father), ‘Al Sahm’ (The Arrow), ‘Hams Al Nujoom’ (Whispers of the Stars), ‘Al Umr Lu’ba’ (Lifetime is a Game), ‘Du’a Al Sheikh Qaf’ (The Prayers of Sheikh Qaf) among other stories, in which Mahfouz depicts the Egyptian environment.

Moreover, Shu’air points out that the stories he publishes today do not differ from the creative worlds of Naguib Mahfouz, and are an extension of the stories of his childhood, which he recalled in ‘Hikayat Haritna’ (Tales of Our Alley) in 1975, as well as in ‘Sada Al Nisyan’ (The Echo of Forgetfulness) in 1999, but they are laden with the symbolism and wisdom of an older Mahfouz.

“The setting of the stories is the Alley, the lively locale of Mahfouz’s world, a definite path that leads to a basement where homeless people live. Above this basement an ancient fortress rises and is inhabited by where live ghosts and goblins’, he said.

It is worth mentioning that Naguib Mahfouz (1911-2006) is the first Arab author to receive the Nobel Prize for Literature, and many of his have been made into films and TV dramas.