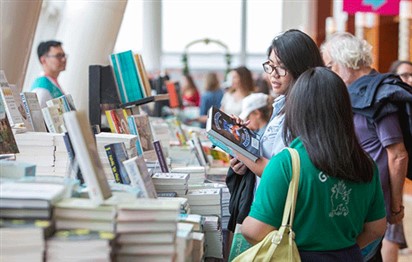 Grace on the page and the stage was one of key themes of the opening day of the Emirates Airlines Festival of Literature.

The annual literary meet up, with most sessions held at the InterContinental Dubai Festival City, hosted a variety of international and regional authors, in addition to former ballet super-star Darcey Bussell.

The latter arguably drew the biggest crowd of the day when appearing for her session.

Titled Evolve, after her new book which provides an intimate account of her career, the 49-year-old former dancer and now judge in the British television talent quest Strictly Come Dancing took us through the many stages of her career.

She regaled the audience with her star turns with The Royal Ballet in addition to her iconic appearance at the 2012 London Olympics Closing Ceremony where she led a troupe of 200 ballerinas.

Despite the consistent acclaim throughout her career, Bussell was at pains to point out – particularly to the aspiring young dancers in the audience – that it didn’t come easily.

“You have to learn to take the blows and hardships that also come with the career of a dancer, and it’s not just about losing certain parts that you wanted but also the injuries that comes with it,” she stated.

The biggest challenge of which, Bussell said was her tall frame, a feature which didn’t fit with the British ballet aesthetic at the time.

“I was always seen as too athletic for the British dance world,” she said.

“It was quite unusual because I was never seen to be quite British and we always gravitate towards what our style is. And that’s the image of the ballerina to be this waif-like physical form.”

Bussell credits her ability to break down those barriers to a stubbornness that partly stems from her dyslexia.

“I had a serious form of it at school and that meant I had to work extra hard and I was behind everyone else. So there has always been that struggle of trying to keep up,” she said.

“Once I knew I had the physical attributes of a dancer, I just knew that I wouldn’t fail at this. And that is what has driven me and for that I never had no regrets about having dyslexia. It allowed me to fight and made me the person that I am.”

Shahad Al Rawi confirms a new novel is in the works

Also making an appearance at the festival is the Dubai based Iraqi novelist Shahad Al Rawi.

The 33-year-old is still on the publicity trail of her poignant 2016 novel The Baghdad Clock, which was shortlisted for last year’s International Prize for Arabic Fiction, in addition to receiving an English translation.

“I am still amazed by the reaction,” she told The National before her session.

“I realised that this book is much smarter than me. It continues to travel and meet all these amazing people and visit places I can only dream off.”

But the work had a tough start. Al Rawi remembers how Arabic critics initially scoffed at her novel upon its release and disparaged her writing credentials.

“They viewed me as this young writer and really nothing more than that,” she said.

“And because of that I knew they really didn’t read the book because the first part of the story was told through the eyes of a young child. They didn’t continue through the book where the narration changed when that child became an adult.”

She credits the IPAF nomination for causing a welcome reappraisal of her work and setting up the anticipation for her next novel.

“It is nearly done and it will be called Picasso’s Galaxy,” she confirmed.

“It will focus on a small town in Iraq that is being slowly submerged in water. It will be told in three different time frames and will have the fantastical and surrealistic themes that I enjoy writing.”

History is more than just research

After the success of his brilliant 2015 opus The Silk Roads, Frankopan returned to the UAE to discuss his new book The New Silk Roads.

A stand-alone work, Frankopan examines the present state of affairs along the ancient route. This includes how technology and new economic opportunities have affected countries such as China, Russia and the rest of Central and South Asia.

Speaking to The National before his session on March 2, Frankopan recalled how the book was initially meant to be an added chapter to an updated version of The Silk Roads.

“My publisher originally wanted to put out a new edition and I spoke to them about this and said that a lot of things happened in the last three to four years, so can I write a new chapter to say what happened since,” he said.

“They initially said that I could write three to four thousand words for a new chapter, and then I said can I write much longer as there was too much going on. They said fine and from that it grew to be this new standalone book.”

One point that Frankopan will highlight in his upcoming festival session was that writing history is more than just trawling through archives. An effective telling of history, instead, is when the writer examines all the various facets of the particular period. In that sense, a historian is always researching.

“For example, I was having lunch with my wife today and the whole time I was looking at people, what were they doing, what were they wearing, who was serving, what food was on the menu and what people were ordering. I am constantly harvesting information,” he said.

“Some people think that when it comes to writing history, there is a work time and then you switch off and watch Netflix. But the experience of human living is every single interaction you have.”

The Emirates Airline Festival continues on Saturday with a bevy of author sessions, workshops and book signings. Here are a few key sessions to look out for.

Freelance photojournalist Lalage Snow discusses her acclaimed book War Gardens: A Journey Through Conflict in Search of Calm, which looks at how civilians in war-torn nations tended their gardens amongst the carnage. The book is an affecting reminder that despite the hardships, life does go on.

Francesca Affleck, author of ­Discovering the United Arab Emirates, and Roudha Al Marri, author of UAE 101: ­Stories and Cultural Learnings, take us on a journey back in time to show us the how the UAE was formed in 1971 from a web of different cultures to the thriving metropolis we know today. Best part of all, as you will find out in this session, that there are still plenty more areas to explore and stories to be told about the UAE.

The Theory of Everything: Screening and Talk with Jane Hawking

Some may have seen the 2014 Academy Award winning film, but this time around you will receive some new context courtesy of Dr Jane Hawking in the audience. Prior to the film, the wife of the late physicist Stephen Hawking and author of the affecting memoir in which the film is based on, will discuss the experience of writing the book and her life since its success.

For more information on sessions taking place at the Emirates Airline Festival of Literature, and to buy tickets to the events, visit www.emirateslitfest.com

“Reading will remain our shield against any challenges or difficult times”: Mohammed bin Rashid