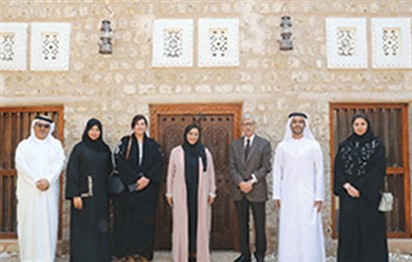 The visitor centre chronicles the history of Sharjah from 1820 until 1971 in three key galleries, each complementing the narrative of ‘Sharjah: Gateway to the Trucial States’.

The first gallery unfolds the story of Sharjah’s history before, during and after the Trucial States period, highlighting the main events in which the emirate had a leading role on local, regional and international scales, enhancing peace and security across the region and driving development and prosperity.

The second gallery thematically links the serial sites spanning the emirate’s coast, desert and mountains through an interactive model.

The third gallery is dedicated to highlighting the role of the Historic Town of Sharjah during the Trucial States period, introducing visitors to the urban and architectural layers of the town built over two centuries.

The galleries highlight exceptional value of the nominated cultural heritage sites that the Emirate seeks to include on the World Heritage List of the United Nations Educational, Scientific and Cultural Organisation (Unesco).

Committee members discussed the nomination and evaluation processes, and explored updates of the nominated sites and plans of protection and management to ensure preserving their authenticity and integrity. They adopted a number of strategic decisions that will support the preservation of the cultural heritage and enhance mutual collaboration between cultural entities in the Emirate of Sharjah.

Khuloud Al Houli, Director of ‘Sharjah: Gateway to the Trucial States’ Management Office, said that “the Visitor Centre aims to introduce locals, tourists and residents to the role of Sharjah during the Trucial States period.

She remarked that while the region was an attraction to global powers, Al Qawasim’s political and economic wisdom was able to provide security and stability in the emirate. Backed by these strengths, Sharjah went on to play a leading role in cross-cultural communication through the development of security, communication and cultural exchange systems. Through interactive and modern models on display that enrich the visitors’ experience, the Centre is founded to promote knowledge and awareness about the region’s history prior to the formation of the UAE.

The centre was developed by the Management Office of ‘Sharjah: Gateway to the Trucial States’, in collaboration with Heart of Sharjah Management at Sharjah Investment and Development Authority (Shurooq), Sharjah Institute for Heritage, Sharjah Archaeology Authority and Sharjah Museums Authority.
www.gulftoday.ae