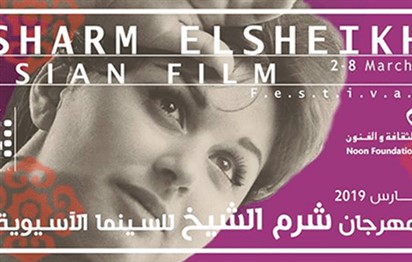 Fifty-eight films from 26 countries will be competing for nine awards in five competitions, with three Egyptian films to have their world premiere

The organisers of the Sharm El-Sheikh Asian Film Festival (SAFF) have announced details about its third edition taking place between 2 and 8 March in the coastal Red Sea city.

“The festival is seeking uniqueness. Asian cinema presents many world-class movies every year, even from unexpected countries like Afghanistan and Bangladesh,” SAFF head Magdi Ahmed Ali said during a press conference in Cairo Tuesday.

Fifty-eight films from 26 countries will be competing for nine awards in five competitions, with three Egyptian films to have their world premiere.

“The festival was originally located in Luxor and was made for European films before it was agreed upon to hold a festival in Sharm El-Shiekh,” said Gamal Zayda, head of the Noon Foundation for the Arts, which is organising the festival.

Zayda revealed that the Best Actress Award is named after the late icon Souad Hosny, while Best Actor honours Ahmed Zaki. Each award carries a prize of $3,000, as does the award for Best Feature Film, which will be presented by the Ghad Al-Arabi television channel.

For the first time in Egyptian history, an award will be presented for the Best Animated Feature Film. Other awards will include Best Screenplay, Best Director, and Best Documentary.

Awards will also be given for Best Short Film and two certificates of appreciation for the second and third runners up.

In addition to a workshop by Egyptian documentary filmmaker Ali Al-Ghazoli, the festival has launched another youth filmmaking workshop where participants made a series of short films to be screened during the festival.

The famed Chinese Director Xie Fei, the third edition’s guest of honour, will be the head of the film festival jury. Xie Fei’s works have won him multiple awards internationally and in China.

The opening ceremony, presented in cooperation with the Chinese Cultural Center in Cairo, will showcase ancient Chinese Folk Dances as well as a performance by Azerbaijan’s Dilara Kazimova before the screening of the feature documentary ‘Crew’ directed by Islam Rasmi.

Famed Egyptian actress, TV presenter and producer Isaad Younis has been appointed to be the honorary president of this edition of the festival.

The Noon Foundation for the Arts has stated that “it is our duty to give Egyptian and International artists venues and opportunities to inspire and in turn be inspired by each other, to create new identities and to express these identities; the old and the new, the Egyptian and the international.

“Our focus may shift as the world changes and as circumstances change, but our vision will stay the same; to build a sustainable friendship between Egypt and the rest of the world, to support the growth and development of all Egyptian visual arts, and most of all, to curate a better future for everyone.”