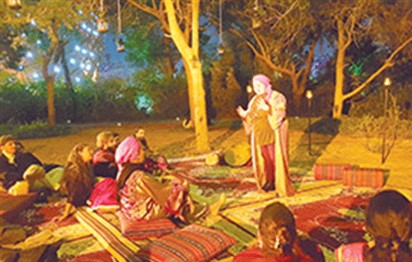 Who isn’t missing days of childhood and wants you want to relive it? Bedtime stories and fairy tales have always been an integral and unforgettable part of one’s childhood memories. The International Story Telling Festival that kicked off on Thursday and runs until 16 March at Al Noor Island in Sharjah can get you one of a kind experience of stories. Held under the theme “Treasure of Words,” the festival brings an array of different traditional tales narrated by professional narrators from all over the world – including the US, UK, UAE, India, Italy, Egypt, Morocco – told in Arabic and English languages, accompanied by music and dance.

The opening night of the festival saw a considerable turnout and interaction from different audiences. It featured tales from Arabic, Indian, Italian, Moroccan, British, and Canadian heritage. The audience were put into the mood of “Arabian Nights” by sitting on floor cushions and pillows. Each performer wore the traditional costume related to the tale’s origin. Also traditional songs with live music were part of the performance.

“People are very hungry for stories. You can see that through the expression in their eyes. This is why it’s important to come,” said Paola Balbi, leading performer from Italy and artistic director of the festival, speaking about the importance of storytelling for the contemporary audience.

“Stories are better than films ever. Because when a good storyteller tells a story, the listener imagines it in the best possible way and this is what creates magic whereas the screen is a passive and one-way interaction,” added Balbi.

As an international storyteller, Balbi sees performing in the United Arab Emirates as very special as the audiences come from different nationalities and backgrounds.

For Balbi Emiratis are well connected with their oral tradition and storytelling. “This project aims also to raise storytellers from the UAE and to have them coming to our festival in Europe and America. They can be the best ambassadors for their culture,” said Balbi.

To Balbi her grandfather was the best storyteller who inspired her to be a narrator. “For 30 years my grandfather made me believe through his stories that his dog could talk and I never questioned him,” added Balbi.

The festival is arranging training workshops for storytelling on 15 and 16 March run by best storytelling world coaches.

The Gulf Today also spoke with Xanthe Gresham (a performer from the UK), and asked her about the possibility of changing little details in the story so that it becomes modern. For instance, instead of saying he went into his carriage, we say he walked into his car to make it modern. She explained that there are no rules in the story except the importance of interaction with the audience. However she is against modernising heritage stories as “people want to be transported into another world when they come to storytelling,” she clarified her view.
www.gulftoday.ae