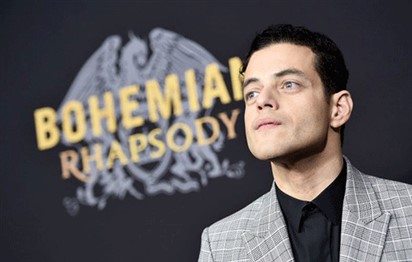 The Oscars countdown is almost over – both fans and critics have already locked in their favorites over who will take home this year’s trophies.

It is a particularly exciting season for Arabs and Muslims, as a few Oscar contenders are set to make history for the region.

It would be a big upset if Rami Malek does not win the coveted Best Actor trophy on Feb. 24, as his epic transformation into rock legend Freddie Mercury in “Bohemian Rhapsody” has been recognized in every awards show preceding the 91st Academy Awards: The Golden Globes, the BAFTAs and SAG.

Born to immigrant parents, the Egyptian American is poised to make history as the first actor of Arab descent to clinch the top acting prize at the Oscars, seen as one of the highest recognitions in the field. In 2016, he scored an Emmy for his performance in the hit TV show “Mr. Robot.”

A frontrunner for Best Supporting Actor, Mahershala Ali is heading strong into the Oscars with multiple wins on his resume for his role in the historical dramedy “Green Book.”

The 44-year-old made headlines in 2017 when he became the first Muslim to win Best Supporting Actor at the Oscars in its 91-year history. Ali could replicate this success this year.

Oprah Winfrey, a voting member of the Academy of Motion Picture Arts and Sciences, has said Nadine Labaki’s “Capernaum,” nominated for Best Foreign Language Film, is a must-see.

Ever since the Lebanese drama won the Jury Prize at the Cannes Film Festival, more and more people, including colleagues in the film industry, have been praising Labaki’s work.

But it is going to be an uphill battle as her film competes with Alfonso Cuaron’s “Roma,” which has won all foreign-language film recognitions ahead of the Oscars.

Of Father and Sons for Best Documentary Feature

Berlin-based Syrian director Talal Derki took it to a different level when he lived with a Daesh family to shoot his award-winning documentary “Of Father and Sons,” which depicts radicalization from a very personal viewpoint, and is nominated for Best Documentary Feature.

But the courageous Sundance Grand Jury Prize winner is up against a tough bunch, including fan favorite “RBG,” which documents the life of US Supreme Court Associate Justice Ruth Bader Ginsberg, a living legend in American law.

Critics have also placed their bets on “Free Solo,” a sports documentary that depicts the athletic feat of professional rock climber Alex Hammond.