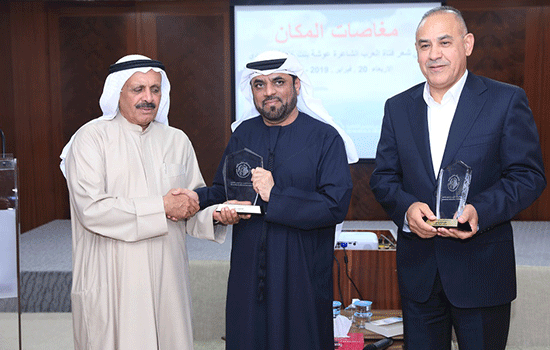 In celebration of the memory of late poet Ousha bint Khalifa Al Suwaidi also known as ‘Fatat Al Arab” (1920-2018), the Sultan Bin Ali Al Owais Cultural Foundation hosted a cultural evening under the title of “Diving into the Poetry of Fatat Al Arab, Poet Ousha bint Khalifa Al Suwaidi”, which took place on Wednesday evening,  February 20th, 2019. The event, which was attended by wide audience of intellectuals, authors and culture enthusiasts featured researcher Mu’ayyad Al Sheibani, who shed light on the journey of the late poet, who is considered a pioneer of Nabati poetry in the UAE. The event also featured poet Mahmoud Nour, who read out excerpts from the poetry of Fatat Al Arab.

Speaking about the late poet Ousha bint Khalifa Al Suwaidi who was previously known as ‘Fatat Al Khaleej’, researcher Mu’ayyad Al Sheibani said that she is considered one of the pioneers of popular poetry in the UAE and the Gulf. He added that Fatat Al Arab was born in Abu Dhabi and that she retired from poetry in the late 90s and continued to recite poems praising Prophet Muhammad (Peace be upon him) for the remaining part of her life.

Moreover, Al Sheibani made a comparison between the poetry of Fatat Al Arab and Nazik Al Malaika in terms of vocabulary and setting, citing examples from their poetry in evidence of the similarities between them. He also pointed out that the late poet was dubbed “Fatat Al Arab” by His Highness Shaikh Mohammad Bin Rashid Al Maktoum, Vice-President and Prime Minister of the UAE and Ruler of Dubai- May Allah protect him- after she received the Prince of Poets Medal for Popular Poetry in 1989.

On the other hand, poet Mahmoud Nour read selected poems by the late Fatat Al Arab, which were greatly admired by the audience. Following this, there was a discussion about popular poetry and the vocabulary its uses, which require great efforts to continue being part of the contemporary literary scene. Moreover, novelist Fathiya Al Nimr raised a question about whether Fatat Al Arab had written any poetry in classical Arabic, which was answered by researcher Mu’ayyad Al Sheibani who explained that she had only written Nabati poetry. Furthermore, poet Hussein Darwish demanded that a literary award bearing the name of the late Fatat Al Arab be launched to recognize the contribution of excelling female poets. The suggested award would follow the lead of similar international awards dedicated to literature by women such as the French ‘Femina’ prize and the Orange prize in Britain, he said.

At the conclusion of the seminar, Dr. Mohammed Abdullah Al Mutawa thanked researcher Mu’ayyad Al Sheibani and poet Mahmoud Nour for their great efforts and presented them with commemorative shields from the Foundation.

Next, researcher Mu’ayyad Al Sheibani signed copies of his new book “Bahr Ousha: Diving into the Poetry of Fatat Al Arab, Poet Ousha bint Khalifa Al Suwaidi”. The book, which has recently been issued by the Sultan Bin Ali Al Owais Cultural Foundation, sheds light on the life and journey of the late poet.

It is worth mentioning that the book is the 23rd publication in the “Icons from the UAE” book series; a project launched by the Sultan Bin Ali Al Owais Cultural Foundation in 2012 to document the journey of influential Emirati personalities that have left an indelible mark on the cultural scene in the UAE.

The preface to the book reads: “The most striking thing that you encounter as you read the poetry of Fatat Al Arab is the massive amount of cultural references, symbols and denotations, coupled with social, historical and spatial data manifested in the form of innovative poetic vocabulary and imagery that is firmly grounded in the realm of art and transcending beyond it to other realms of knowledge. Such a creative paradox is the reason why such a unique poetic experience deserves to be studied and appreciated.”

Habib Al Sayegh.. The Modernist Awareness and the Obsession with Experimentation: A New Book Released by Al Owais Cultural Foundation within the “Notable Figures from the UAE” Book Series