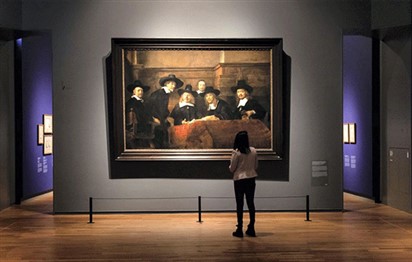 The Rijksmuseum’s new exhibit consists of 22 Rembrandt canvases and 60 drawings in the museum’s collection, as well as a good 300 prints

“Rembrandt’s contemporaries didn’t use the word rebel, but that’s how they thought of him,” says Jonathan Bikker, curator of research at Amsterdam’s Rijksmuseum.

“One of them said he broke the rules of art, another went so far as to call him the first heretic of art. He is certainly not a court painter who is going to kowtow to an aristocrat or a king or the rich citizens of Amsterdam who can afford his paintings.”

And Bikker would know. He has just written a book, Rembrandt, Biography of a Rebel, the first to be published by the museum. It accompanies an all-encompassing new exhibition celebrating 350 years of the Dutch Old Master. Coincidently, the largest privately held collection of Rembrandts is currently on display at Louvre Abu Dhabi as part of the Rembrandt, Vermeer and the Dutch Golden Age: Masterpieces from The Leiden Collection and the Musee du Louvre exhibition.

All the Rembrandts opened at the Rijksmuseum on Friday. It doesn’t include every canvas or etching produced by the Dutch artist, but it does encompass all 22 Rembrandt canvases and 60 drawings in the museum’s collection, as well as a good 300 prints. The latter are the real draw, as they are so fragile they rarely go on display.

The Rijksmuseum boasts the largest collection of Rembrandt paintings in the world. The idea behind the show was that Rembrandt van Rijn’s life and art have not been investigated together for a very long time, and as 2019 marked the 350-year anniversary of his death, it seemed apt to address that. “There are the people working on the documents of his life, those working on the paintings, those on the prints and others still on the drawings,” says Taco Dibbits, the museum’s general director.

“For the first time, we bring them all together.” In this regard, the show was opened in perhaps one of the most fitting of ways, with 150 Rembrandt namesakes, ranging in age from 11 months to 75 years, from all parts of the Netherlands. Among them were five men called Rembrandt van Rijn.

Getting a closer look at the works

The first few rooms housing the exhibition feature Rembrandt’s early drawings, etchings and paintings based on observing others or looking in the mirror. His subjects are close family members and he practises drawing endless different facial expressions and faces with wrinkles. We immediately see how experimental and pioneering he was, unafraid to try new things and combine techniques – a theme that will come up throughout the rest of the exhibition.

A great example of this is a self-portrait from 1629 in which he uses a reed pen instead of an etching needle on the plate. The result is “basically a failure as all the lines are doubled”, says Erik Hinterding, the exhibition’s curator, who is also curator of prints for the ­Rijksmuseum. “But Rembrandt is finding his way.”

Elsewhere, we see the artist combine etching with other techniques such as drypoint (an engraving method where the design is scratched directly on to the copperplate and no acid is used), touching up his etchings with different tools much in the manner of a ­modern-day Photoshop user. “Rembrandt never followed the rules; never followed conventions both in his art and in his personal life,” Bikker says.

Rembrandt’s early self-portrait of 1628, in which he paints most of his face in shadow and depicts a radiant tactile mop of tousled curls (achieved by using the butt end of his paintbrush), perhaps best shows his innovative spirit.

Though the face is hard to decipher completely, it is nevertheless recognisably his. “Who thinks of doing something like that? Well, Rembrandt does,” says Hinterding. “The amazing thing is nobody had done that before he did – he is being brutally experimental.”

Understanding the appeal of Rembrandt

By shining a light on the artist’s process of trials and errors, and by showing the pieces where, in Hinterding’s words, he was just “fiddling about” on copper plates he cut up and reused, Rembrandt’s appeal becomes very clear.

The artist likes to depict human beings in raw, honest and emotional states, showing their imperfections. It’s a heady mix for anyone who has ever suffered a modicum of self-doubt. For Hinterding, it also signifies something else: “Rembrandt was a brilliant artist but he wasn’t born that way – he had to work at it to become the great Rembrandt we know.”

Rembrandt’s fascination with observing people and telling stories continues throughout the show. We see affectionate, intimate etchings of his wife Saskia in various poses, and prints of beggars and street musicians whose faces will be used in later canvases. We see Biblical stories depicted with an immediacy and humanity that make them universal. And after Saskia’s untimely death in 1642, we see the bucolic landscapes of Amsterdam’s countryside.

Rembrandt went through a crisis after his wife’s death, says Bikker. “He doesn’t make any commissioned portraits for at least nine, maybe 10 years; he essentially drops out and just does the things he likes to do.” It’s back to the notion of Rembrandt the rebel. And two canvases in the last section of the exhibition pay outstanding tribute to this idea.

One is his self-portrait, titled Self Portrait as the Apostle Paul, painted in 1661. It is a candid portrait of himself aged 55 that shows his predilection for depicting the reality of ageing, instead of the more acceptable Italian Renaissance ideal of immortalising young women.

Another painting, The Jewish Bride, is a late and wonderfully affectionate work dated 1665-1669 inspired by the Old Testament tale of Isaac and Rebecca. It’s so intimate in fact that you almost feel like a third wheel as the viewer. The painting features what Bikker calls the “thickest passage of paint in the 17th century”, on Isaac’s sleeve. A closer look at the shimmering sleeve in question shows a tactile impasto that has been modelled almost like a sculptor would model clay. “This was against the rules,” says Bikker. “The rule was you painted a flat surface and used shadow and light to show the three-dimensional objects.”

Another side to the artist

There is a great deal to consume, enjoy and learn in this new presentation of Rembrandt’s work. The prints are enlightening about his approach and willingness to experiment, as well as marvellous little universes of detail in themselves. The picture captions are comprehensive and focus on what made the artist so innovative or unconventional.

Dutch designer Irma Boom’s exhibition concept is also quietly audacious. By using a deep electric blue on undulating walls as the backdrop, Rembrandt is brought right up to date and the spaces are lively and unintimidating.

“It pulls it away from the traditional image of Rembrandt as dusty, old-fashioned or displayed on an endless wall of works,” says Hinterding.

The grey – rather than cream or white – mounts are also more contemporary and absorb light, thus allowing you to focus only on the work inside them.

If you are after a Rembrandt canvas spectacular, you could be disappointed (though the newly acquired and lavish marriage portraits of Marten Soolmans and Oopjen Coppit are worth the entrance ticket alone), but there’s something about spending time up close with Rembrandt’s miniature prints that creates a sense of intimacy, identification and empathy with the subject matter that seems very apt for this artist.

All the Rembrandts is at the Rijksmuseum until June 10

NY museum says ancient coffin was looted, will go back to Egypt