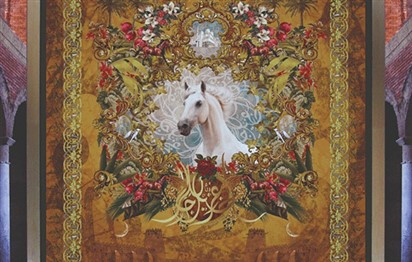 “Portraying falcons is destiny for me, because it immediately brought me to the Arab world.” This was when German artist, Christine Schubel, fell in love with Arabic traditions and culture, becoming now a constant exhibitor at UAE-based exhibitions.

Born and raised in Bavaria, Schubel has created a new way of art called ‘paint-shooting’, which simply means taking live-shootings of moving animals, which she wants to portray, then turn them into paintings which elaborate the animals’ performance, character and aura while in motion, resulting in a “perfect fusion” between the animal and painting, as she likes to put it into words.

Reviving the woven tapestries is another type of art that she masters, however, in all her works, the falcon and Arabian horse have evidently influenced her imagination.

“The fact that I started portraying falcons is destiny for me, because it immediately brought me to the Arab world, where my love of Arabic traditions and culture was awakened and sparked a blazing flame in me,” she says in an interview with Emirates News Agency, WAM.

“It was the beginning of my extraordinary artistic career.

“I was particularly interested in Sheikh Zayed’s great passion for Arab tradition, culture and nature and his foresight and wisdom to recognise that traditions and culture are the most valuable asset to preserve.

“I was often told that my pictures let flowers grow in the soul.

“My art is a declaration of love to the Arab culture and to the beauty of the nature and a homage to the great role model, Sheikh Zayed,” she adds.

With almost 40 years of experience, Schubel believes that the most important exhibitions where she showcased her arts were in Munich, Hollywood, Rome, Abu Dhabi and Bahrain.

“My message, which I convey in these art exhibitions needs no explanation,” she says.

“It is immediately understood by everyone and awakens in every viewer deep emotions such as: admiration, pride, awe, joy, humility, respect, amazement, satisfaction, fascination.”

The artist who was awarded the ‘Darley Award’ in Hollywood in April 2018, has recently participated at ‘Sheikh Zayed: A Century of Memories’ exhibition and ‘Sheikh Zayed and Europe: A Journey’ exhibition, which was hosted by the EU Delegation in the UAE.

“I represented my work to important personalities from both the UAE and Europe, and was honoured to stand in front of H.H. Sheikh Abdullah bin Zayed Al Nahyan, Minister of Foreign Affairs and International Cooperation, and show the portraits I created of Sheikh Zayed in my tapestries,” Schubel says.

Talking about her art style, ‘paint-shooting’, she explains, “at the beginning, when you want to shoot the animal, it is very important to have a personal encounter with it.

“I need to feel its aura and personality, and to know the detailed colour shades of the skin, eyes, feathers, and other details. This information is essential for my paintings.

“I visualize the personality, the aura of the animal on canvas, painting huge colour compositions (up to 80 square meters). Several colour layers are painted to increase the impression of depth,” she adds.

It’s not a common photo shooting, the German artist says.

“It’s a spectacular photo action with moving animals in front of my huge paintings. To be successful you need a great commitment, a lot of patience, a good feeling for the animals and a big talent for improvisation. The photo shooting is an adventure for which you need some courage, not knowing how the animals (for example horses) will act,” she explains.

“A special team has to support me. Besides working with the animals, you need to fix the portable electric devices (electric generators, spotlight and others) which have to be brought along and manage the elaborate logistics. Not to forget all the additional equipment for special effects, and high-end cameras to get best quality.

“The photos are taken both indoors and outdoors. Of course, it’s a greater challenge doing it in nature as there are many influences which make it much more difficult, like sun, wind, and rain. Shooting free-flying falcons also is also a particular challenge. Photo shooting can take several days or much longer.”

“I have to rent a big hall which I use as my atelier and a team who manage the difficult logistics. The painting period can take several months,” Schubel concludes.