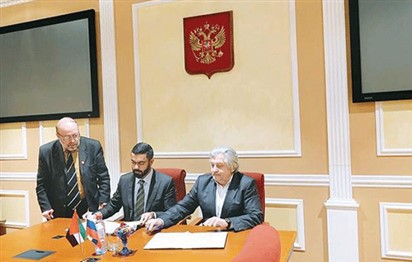 The Department of Culture and Tourism – Abu Dhabi, (DCT Abu Dhabi) has announced that Russia has been named the Guest of Honor for the 30th edition of the Abu Dhabi International Book Fair (ADIBF), which will take place from 16th to 22nd April next year. Russia’s participation is expected to attract significant visitor numbers with various themed events and activities reflecting various fields in Russia such as literature, culture, art and music.

Russia’s participation in the Fair was confirmed after the signing of a Memorandum of Understanding between DCT Abu Dhabi and the Federal Agency for Press and Mass Communication – Moscow, The MoU was signed by Saif Saeed Ghobash, Undersecretary of DCT Abu Dhabi, and Vladimir V. Grigoriev, Deputy Head of the Federal Agency for Press and Mass Communications, in the aim of coordinating the participation of Russia in the exhibition.

Commenting on the announcement, the Undersecretary of DCT Abu Dhabi, Saif Ghobash said, “It is a measure of the deep and longstanding relationship between Russia and the UAE which has influenced the decision to choose Russia as the Guest of Honour for the 30th edition of the Abu Dhabi International Book Fair in 2020. Russia is renowned for its influential cultural output, including its world-famous literature, and the country is home to thousands of publishing houses, some of which we are looking forward to welcoming at the 2020 Book Fair. With the signing of this MoU, we hope we can further the UAE’s already strong cultural, academic and artistic links with Russia, while also supporting DCT Abu Dhabi’s mandate to increase cultural tourism.”