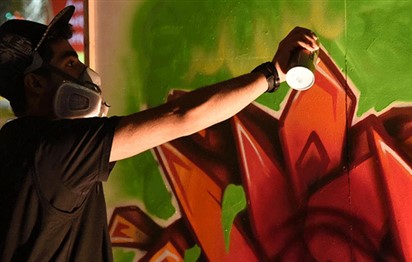 Spray-painting walls in the capital has gone from being viewed as vandalism to art, revealing how those spearheading change are altering a nation’s mindset

It is a scene many in Muscat might not have seen before: hooded figures holding spray cans, bent over public spaces as they bring murals to life.

Yet, far from the lands that popularised it, graffiti art is growing in popularity in Oman’s capital, emerging from the shadows of walkways and bridges, into the public domain.

Artists such as Suleiman Al Rashdi have spearheaded the movement. He remembers the old days, when graffiti was little more than scrawled ­images and messages left on walls, before he and a group of like-minded artists sought to bring a new level of graphic art to Oman.

United by an urge to try something different, each individually found their way to graffiti and its ability to give vibrant colour to emotions.

Al Rashdi recalls a time before the tags, ­murals and elaborate characters were acceptable; a time when graffiti was looked down upon, when their art was regarded as little more than vandalism.

“In the old days, the only way people could make graffiti was by using low-quality sprays and by doing it illegally,” Al Rashdi says.

To begin with, seeking out legal avenues to express themselves proved the biggest ­challenge. Al Rashdi’s family offered unconditional support, his father allowing him to practise on the walls of their backyard. Others were not as lucky. Abdul Malik Al Maskari was one of them.

Considered Oman’s most recognisable graffiti artist, he looks back and laughs at his journey.

Before picking up a spray can, Al Maskari found himself searching for graffiti in his neighbourhood and under bridges, longing to find the bright colours and style he associated with it. “I never found any drawings or art like graffiti. Only simple inscriptions without colour or style. So I decided to try to make my own,” he explains.

Like his peers in other parts of Oman, Al Maskari used whatever sprays he could get hold of to hone his skills. The result was often around long enough to be photographed and shared with friends before being painted over.

These creatives not only yearned for a legal way to do their work, but they also wanted the graffiti spray brands that would take their art to the next level. It was a shared goal even though they, scattered as they were in different parts of Oman, did not know it. Nor could they have guessed that they would soon have all the high-quality tools they ­needed-and more.

Al Rashdi proved to be the catalyst for that change when he founded Paintgree, the Sultanate’s first graffiti art store. Long before it became a hub for German Montana Cans (a type of spray paint), it was a simple idea to answer an urgent need.

Al Rashdi knew that for graffiti to reach its true potential in Oman, they would need the right sprays and colours. Unfortunately, the public did not agree.

“People were against the opening of a graffiti store. They had a preconceived notion that graffiti was just a form of vandalism; a crime. Some even came to the shop to try and convince me to do something else as a business,” he says.

Al Rashdi frequently cited the examples of world cities and museums to convince his detractors there was nothing wrong with graffiti. Using the beautiful murals in places such as Berlin and Dubai as examples, and the fact artists were paid to paint them, helped change the mindsets of many.

Soon after, the Omani Society for Fine Arts commissioned w

This year, even the recent Muscat Festival included an open-air graffiti exhibition, with Al Rashdi and his fellow artists contributing their time and effort to share their work with thousands.

A long list of Omani creatives have continued to join the graffiti artist ranks. Al Rashdi believes it’s a credit to the diversity in style and maturity of the sultanate’s contemporary graffiti scene. Besides Al Maskari’s large, thoughtful murals, there are teenagers like Muhammad Al Khatri who prefer simple, yet effective messages and imagery.

“I like to use messages that remind people to stay positive and make them feel good,” he says, standing in front of a work with the word “enjoy’” emblazoned in yellow.

A new generation of artists

For fellow teenagers Muadh Al Busaidi and Muatassim Al Rawahi, it is their love of calligraphy that they want to share with audiences.

Al Busaidi says the expressiveness of calligraphy and the accessibility of graffiti work well together. Both exhibit talent beyond their years as they work in tandem on a large canvas using sunbuli Arabic script.

“I have unique ideas I want to present in a way that people will love and find surprising at the same time,” says Al Busaidi. The piece he and Al Rawahi are working on fits that description: gold and white, stylistic Arabic letters encircling a canvas painted black, elegantly reminiscent of naqsh and thuluth patterns.

Al Maskari’s 16-year-old brother Abdul Salam has followed in his footsteps and is among the youngest of the group. He is clear about who inspired him to pick up a spray can: his older brother. For some of the others, it is the weight of graffiti’s past that serves as an inspiration.

That’s certainly the way for Abdullah Al Mahrouqi. He says humanity has always used graffiti as a form of self-expression, with the walls of Mayan temples in South America and the Valley of the Kings in Egypt a testament to that fact.

Their range, from messages of hope and despair in the Tower of London to the heroic runes of the Varangian Guard of the Byzantine Army, illustrates an innate desire for humans to leave their mark somehow. Just like the tags, colours and paints used today.

“The history of graffiti has a big impact on me because when I work on a piece of art, I feel like I’m not doing something for myself but for those who see it. I want to reach out to them and inspire them with that piece of art,” he says.

As more events open themselves up to graffiti artists, it seems the time for this art form in Oman to flourish has arrived. Restaurateurs, apartment owners, and local officials – men and women from a wide spectrum of society – are embracing graffiti. It is a paradigm shift years in the making.

And each project and event adds to the roster of artists joining Al Rashdi and his group.

Diriyah selected as the Capital of Arab Culture for 2030